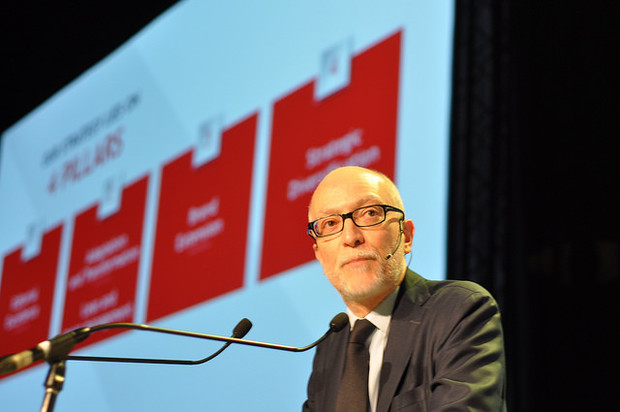 Le Figaro Group (all brands included) is the fourth-largest player on the internet in France, behind only Google, Facebook and Microsoft, Breysse said. The group reaches 70 percent of the country’s digital audience.

In print, with a paid circulation of more than 300,000 copies and 1.7 million readers, Le Figaro is France’s leading quality daily newspaper. It is “a right-wing, conservative paper whose core audience is high-end, wealthy and rather senior,” Breysse said.

A portfolio of leading brands

The newspaper is part of a portfolio of leading brands in both print and digital that together form a diversified, digitized multimedia group, he said. Figaro Group is wholly owned by Groupe Dassault, which specialises in military airplanes, business jets and 3D manufacturing solutions. “All three activities are world leaders, and the group is privately owned by Senator Serge Dassault and his family,” said Breysse.

In 2017, Figaro expects to have 560 million euros in revenue, with an operating profit of 33 million euros, Breysse said, adding that the group employs some 1,650 people, 500 of whom are journalists.

“Having 500 journalists in the group is an asset, not a liability,” he said, adding that the group makes no effort to try to reduce their numbers, but rather aims to keep them well trained to help the group meet its goals.

Despite the group’s leading positions and its financial success, or indeed perhaps because of them, Figaro isn’t about to rest on its achievements. “We need to be excellent in everything we do and deliver outstanding performance, including financial performance,” Breysse said. “Losing money or delivering poor performance is not an option.”

Nor is the group immune to the struggles faced by so many publishers.

And of course print is facing its own serious challenges, though Breysse stressed: “We continue to protect and defend print fiercely, not because we are conservative and backward-thinking, but because we see that print continues to answer our core audience needs. Print is going through intense change. Is print dead? No, we don’t think so.”

The group is expanding its brand via the recently launched Figaro Live, a web video offering. “Figaro Live is our new frontier,” Breysse said.

Though still in its infancy, Figaro Live has a team of 30 journalists and covers news as well as other topics, such as culture, leisure and entertainment, Breysse said.

“The objective is to have a continuous and interactive video flux, with news, magazines, debates, interviews and live events.”
– Jean-Luc Breysse, Deputy CEO, Le Figaro Group

It’s a natural fit for Figaro because many of the group’s journalists are recognised experts in their fields who frequently appear on television already, Breysse noted.

Diversification, Breysse says, is a “pivotal element in our strategy: We consider the media business too fragile and uncertain for the moment, and it simply cannot stand on its own.”

He said the group adheres to three principles in its approach to diversification:

“It is a market totally different from the media market,” he said. “It is a growing market. And the business can benefit immensely from being part of a media group. We produce massive amounts of travel content for the newspaper, magazine and our internet sites. This content plays a decisive role in the readers’ choice of a travel destination and travel agent.”

The acquisition was carefully thought through. Breysse noted that the company undertook extensive research into the travel industry to understand its various segments and their potential.