Community Lab: 24heures rediscovers its communities with a new approach to audiences 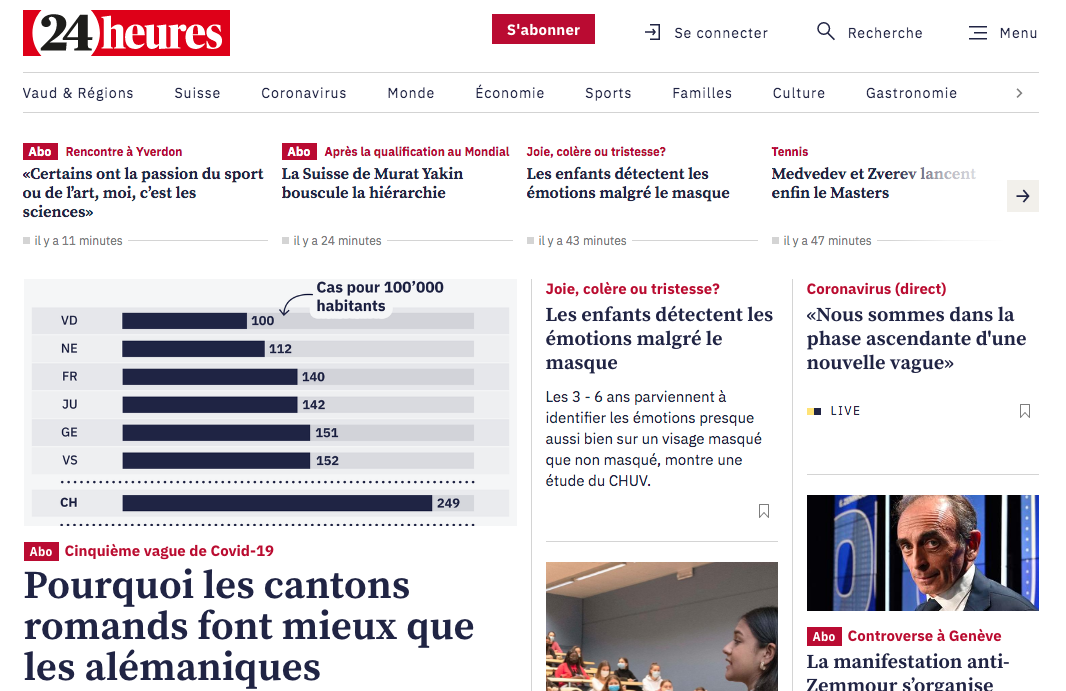 The daily 24heures has a real presence across the canton of Vaud and its capital, Lausanne. One of the things that set this area apart is the diversity of the foreigners who call it home. Although these people number close to 260,000, articles about their lives, interests and concerns are few and far between. As part of its Table Stakes Europe challenge, the 24heures team went out to find out more about Portuguese expats, who make up the largest foreign community in the area.

Can you tell us how you selected your audiences for the Table Stakes challenge and what piqued your interest in the Portuguese community as an audience worth following?

Pascale Burnier: Our gut feeling was the main driver of our audience choices. The DNA of 24heures and its readership profile led us to focus on people who are passionate about local produce and cuisine. We knew that this content already had huge potential and that we could do even better. Similarly, families were a natural choice because we already were a media outlet for families and we wanted to do more for this segment.

We took a different approach with the Portuguese community, and even now, it is hard to tell whether it is going to work. But we wanted to try something new, to go out and reach new readers. We also wished to show our interest in people who live here, but whose realities and concerns usually slip through the cracks of the media landscape.

How did you assess the potential of this audience and what were your first impressions of the expectations of this community?

Burnier: We had seen a couple of times before that articles about Portuguese people who live in our region racked up a huge amount of views. To evaluate their potential, we reviewed a series of statistics : 33.5% of the inhabitants of our canton are foreigners, amounting to about 260,000 people. The Portuguese represent the lion’s share of this population at over 60,000.

We were unable to conduct a poll of Portuguese expats, so instead of that, we interviewed members of the community informally. The two journalists in our “Community Lab” got in touch with Portuguese people who live here to find out more about their expectations, the way that they consume information and their needs as members of this community.

This test run received a warm welcome. The interviewees were happy and flattered that we wanted to get to know them. It confirmed their desire to read more content that deals specifically with their issues.

For other audiences, you can leverage existing data, such as a group of readers that has already been identified or people who appreciate a specific topic that you already cover. In contrast, going out and about to meet your audience is a wholly different experience. What was your approach?

Burnier: It is true, and it was a big challenge for us! We hope that the regular publication of content about this community will slowly but steadily prove to this audience that our journalists keep them in mind. We are therefore counting on word of mouth. Furthermore, we have received feedback from some of the Portuguese interviewees, who went on to tell other members of the community about our work.

But it is not enough. We are taking a more proactive approach by searching for them on social media. We found extremely active Facebook groups for Portuguese expats who live here, amounting to almost 160,000 followers, as well as an Instagram account with 17,000. We also identified “opinion leaders” and influencers in the community. Therefore, when we have content about this audience, we do two things. First, we promote it on Facebook and pay for the ad to be shown to our target audience, namely, Portuguese people who live here. Then, our social media expert devises a tailored strategy to reach this audience. For example, he follows several groups of Portuguese people identified via the 24heures page. Whenever he can, he posts a link to the article that we are running. Of course, he posts it both to Facebook and to the 24heures Instagram profile. Our goal, which we achieved a short while ago, was for the big group of Portuguese people on Instagram to repost content from 24heures (a survey of the community). This is exactly the kind of little boosts that we need. We are starting to establish a connection with this audience. Finally, our social media expert also monitors the topics discussed on Facebook. If he sees that people are talking about topics that we have touched before, he leaves a comment encouraging people to check out our articles.

Who is part of this adventure in 24heures and how are you organised? Have you changed your editorial production?

Burnier: Our Community Lab consists of two journalists, a digital sales and reader revenue specialist, our social media manager and myself.
We meet up on a regular basis (at least once a fortnight) to discuss content and how to reach our targets. We try to run an article about the Portuguese community every week. Thanks to our Table Stakes coach, we have also struck a partnership with Mensagem de Lisboa, a media outlet in Lisbon. We regularly translate articles from this outlet and publish them on our site along with a description of our partnership. Together with the other things, it helps us to maintain our target publication schedule!

You recently scored a major hit with articles to present the Portuguese expats in the canton. What does it tell us?

Burnier: This substantive survey was published in long format on our site and as a 4-page feature in our newspaper. We put a great deal of effort into our online strategy by putting the spotlight on this content for several days. It was a resounding digital success!

The feature got 26,000 page views, which is a lot for our stories. But, most importantly, and this is what is really encouraging, it had the highest conversion rate of any feature in September. At 5.7%, it clearly performed better than other articles. Another extremely interesting detail: 51% of all the visitors who read this article were new readers. As for our projects, we have several articles in the works and, especially, we are extending our scope to other communities. Our future project, which we intend to publish shortly, looks at local grocery shops run by people from Vaud who are part of various communities, small corner shops that open every day of the week and can be a real life-saver in the evenings and on Sundays.

The first part, which is more sociological, is an excuse to talk about these places where we can discover other cultures and cuisines. However, these grocery shops are also gathering points and forums for foreign communities. And, last but not least, they are drivers of integration.

In the second part, we will portray the people who run these shops, who are often highly respected in their neighbourhoods. Finally, the third part is “Recipes from across the world”. We will go out and talk to local “celebrities”, people who are active, admired and followed in their communities and (if possible) on social media, and ask them to whip up dishes from their home countries. The journalists in our other Mini-Publisher team, which is internally known as “The little cuisine and produce company” (“Ma petite entreprise Gastronomie & Terroir”), will help us to conduct these interviews.

Are you worried that going from a team focused on the Portuguese community to a Community Lab that casts a much wider net may end up "diluting" your efforts and make you lose sight of your aims?

Burnier: We decided to become a Community Lab because we believe that, in the long term, there is no valid reason to limit ourselves to a single foreign community. From the beginning, the plan was to start with the Portuguese community because it is the largest one, but also to keep the other communities in mind. We are now working on a project on the Italians, for example. We also look for cross-cutting topics, such as grocery shops.

Our new “Community Lab” name prodded us to look beyond nationality, for instance, in our approach to gender issues. Of course, the main risk is to stretch the concept of “community” so far that it ceases to have any meaning. However, what makes our Lab really great is the fact that we never forget to check in on our audiences and strive to attract them to our brand.