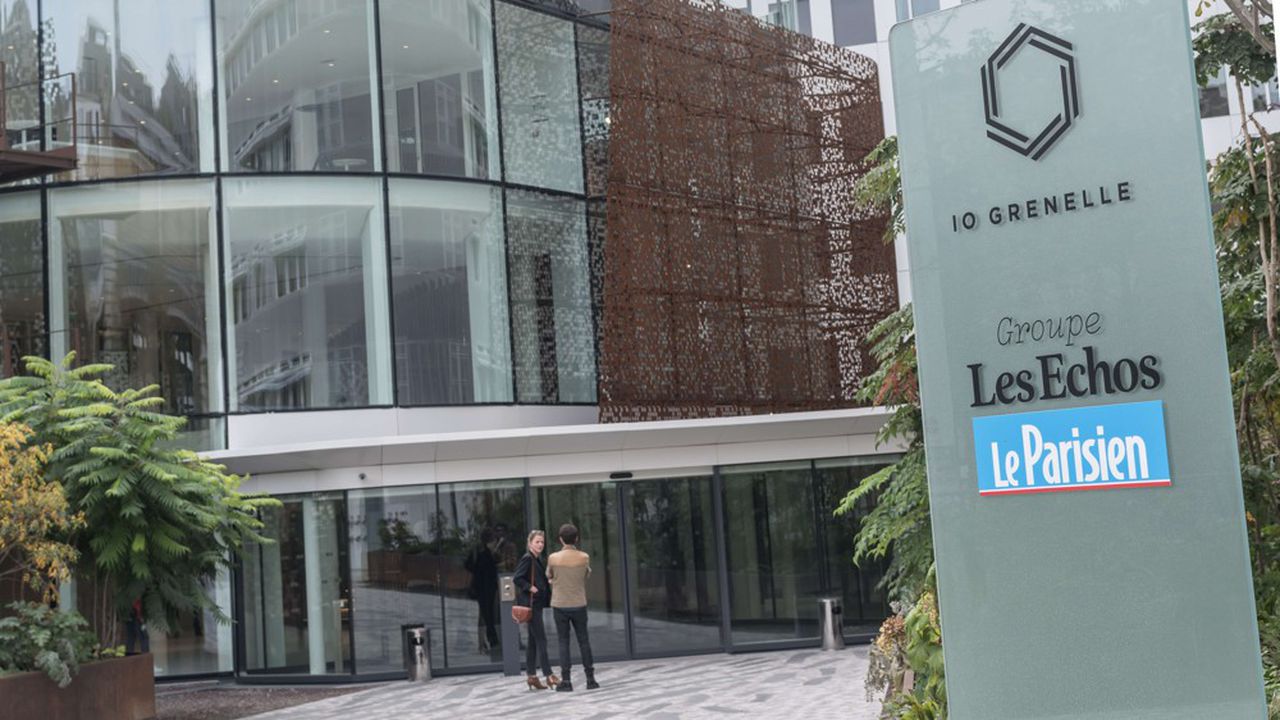 Table Stakes Europe allowed the French publisher to streamline collaboration between the newsroom and other departments of the company, and provided structure to clarify governance in the newsroom. Over the course of the programme, Les Echos also made significant progress with segmenting and serving specific content to its target audiences, including female readers and the start-up ecosystem.

What were the main questions you had when you joined Table Stakes Europe?

Marie Van de Voorde: A few months before joining the programme, we had changed our paywall. During the health crisis digital subscriber recruitment increased and in fact, at that time, we had already begun to collaborate. However, the newsroom had little contact with the subscription and customer marketing teams. We needed to improve the collaborative side of our project. That’s where Table Stakes came in. So we weren’t starting from scratch, but there was room for improvement.

François Vidal: The newsroom had already gone through the transition to digital the previous autumn. We had the basics, a digital-oriented newsroom. We were also aware of what needed to be improved upon, particularly in terms of audience management: CRM, timing, missions by market. There was a real desire to improve but we were in a state of frozen panic and didn’t really know where to start. There were times when we had contact with other departments, but it was all very “as and when”, for specific projects, and generally when things were going wrong. What is more, we were not completely clear on who was really in charge of digital transformation in the newsroom. There was a lack of leadership. The Table Stakes approach provided a structure that clarified governance in the newsroom. Later it set out a framework for moving forward on audiences, around an overall ambition. It is a methodology-based course that has opened up dialogue with the other departments in the company.

Van de Voorde: …an almost military approach in fact! There is discipline, which requires effort and which is clearly one of the points that contributed to the positive outcome.

As you embarked on the project, what were your strengths in terms of digital subscriptions?

Van de Voorde: One of the strengths is the daily support of the audience marketing team. This is a real strength. Our newsroom is really keen, motivated and open to collaboration. They are already on the move. We also have a great deal of expertise in all areas: audience marketing, data and customer marketing. And then, compared to many of our generalist colleagues, we have a very clear marketing positioning: we have a professional audience that makes all the difference.

Vidal: Subscriptions are part of Les Echos culture. Unlike most French dailies, Les Echos is a newspaper that has always had a subscription-based business model. For the editorial staff, having subscribers, serving them, satisfying them, is something they take to heart. Once we made it clear that the digital transition was to focus on subscriptions, it almost came as a relief to the newsroom. What they already knew how to do had value in the world of the future! Of course, a lot of things have to change, but overall the core business remains the same.

You have mentioned your strengths, what were your main challenges?

Van de Voorde: First of all, it’s something that needs to be worked on for the long term. And secondly, I think one of our potential challenges or weaknesses is the downside of our positioning. Our brand and content can sometimes seem at first sight too technical, on many occasions much more than in truth they really are. As things stand today all the audiences we have identified as high-potential targets still retain an image of Les Echos that is far removed from what we are. They think we offer content that is much less accessible than it really is.

Vidal: We used to produce content for a broad range of audiences: company executives, decision-makers, but without really specifying them and without necessarily trying to explicitly serve them, as we do in Table Stakes. We were doing a generalist job. We didn’t work enough on stratifying our audiences.

How did you pinpoint your specific audiences?

Van de Voorde: It was Table Stakes that really got us used to the concept of AudienceS, in plural and with a capital S at the end! Specific workshops were organised on this subject. We focused on what I would call the “old chestnuts”. I am thinking in particular of women readers. Typically, these are audiences that had been on our radar for at least two years, without really knowing how to serve them, how to start working. It’s similar for “Start Up” audiences. There was a real appetite amongst the newsroom, with a highly motivated team, to develop an editorial offer, and at the same time there was no dynamic to kick start and gain momentum, to position ourselves in this ecosystem. We had to run these audiences through our criteria “filter” to prioritise them and start serving them better.

What criteria did you use?

Van de Voorde: A mix of Table Stakes criteria and more internal approaches. Typically, the Start Up vertical we launched would fit the more modern image we wanted to project, but without actually containing any additional content. Table Stakes criteria helped us gain speed and appetite and editorial expertise were key criteria. Were we able to produce early wins quickly? We used to have a kind of mental block of always feeling the need to go through complex, development-intensive projects. Eventually, we found that we were able to produce very effective products without major input from the technical department being necessary.

Vidal: The “Test and Learn” idea makes major leaps seem less dramatic. It’s really relevant. The “newsroom appetite” criterion is also important to underline. On the Start Up side, there was a real desire and enthusiasm.

Was it easy to get this more segmented approach to content across to the newsroom?

Vidal: It’s work in progress. Some of the editorial sections already have this mission. “Start Up”, for example, writes for a specific community, providing it with content that serves it. The same is true for “Patrimoine”. It’s harder for many editorial staff because the idea persists that: “We are Les Echos and the reader should adapt to what we offer and take what they need from it. We do not have a mind-set of serving our audience; we do not meet their expectations and needs. Sometimes we don’t publish enough ‘service’ or ‘how-to’ articles. We are lucky to have journalists who are benchmarks in their field, but perhaps they still lack a culture of public service.

Do you find it difficult to interest them in this aspect of their mission?

Vidal: Yes, it can sometimes make them feel that their role is in decline, that they are offering something less worthy. For them, going out to seek information, being at the front is a worthy task; a service culture, less so. But we will succeed by example; we will prove that there is an appetite.

What was the most difficult thing about choosing your audiences?

Van de Voorde: Actually, it was quite easy. Where we had the most difficulty was not to launch everything at the same time, to leave out some key targets for the moment.

You have also set quantitative targets per audience. Is this also a come down for journalists?

Vidal: It’s not a come down, but they don’t feel this as the sales team does. However, we are convinced that if we do our job well as journalists, we can achieve these targets. They are not set out as the Holy Grail, that’s not our culture. But we know we are making progress. The journalists in our different sections are like locals. They write about people who are their contacts, their sources, and who are with them all the time, like in a local community. Their own ecosystem provides them with the idea that “what they are doing is very good”.

At this stage, how would you assess your choices and your approach?

Van de Voorde: It is impossible at this stage to assess the impact of the programme in quantitative terms. But Table Stakes has really helped us step up the pace of our editorial innovations. We have already released two newsletters, one of which is very successful, and we have created a whole new vertical. At the end of the programme, we will certainly have two more newsletters, and probably a series of webinars. To be honest, we have made even more progress than last year at this time in a period of major current events and during which we have also released new products

Vidal: It is difficult to draw definitive conclusions from the figures at this stage. What is clear is that we have managed to develop at a much higher speed than we did before, including in things that did not seem feasible. The Nicolas Barré newsletter, for example. We had had it in mind for quite some time. It was a dream but we didn’t believe in it. We have done it and it’s a hit. It’s probably the biggest hit we’ve had so far. The figures speak for themselves. It just goes to show the model is right.

What made you take action?

Vidal: It has a lot to do with collective intelligence. We discussed the target, we discussed the timing, we made quick decisions, and we corrected what didn’t work at the start. We succeeded because Nicolas Barré, our Editor-in-Chief, got involved and also because right at the very beginning all the skill sets were already around the table.

Van de Voorde: The discipline of the sessions forced us to monitor closely. You can put out a lot of newsletters all the time. But we had never before designed them and monitored them so closely. When every week we are asked: “what’s the status of number 0”, that keeps us on our toes.

More broadly, what impact has Table Stakes had on your operations?

Van de Voorde: Table Stakes has been great for team motivation. For Customer Marketing, Data and Digital Management, it’s a programme that is very rewarding for the people who take part in it and I hope that filters down into the teams.

Vidal: The newsroom often operates completely independently to the rest of the company. This programme has helped us open up to dialogue and understand the constraints of other teams. In our weekly meetings, there is also a freedom of speech, a direct dialogue that we don’t have in other meetings. In Table Stakes it seems easier to express opinions, to compare opinions, and sometimes to be wrong and to be told so without difficulty. This is one of the major achievements of the whole process.