Nederlands Dagblad: How a Christian newspaper is reaching out to the Netherland’s evangelical community 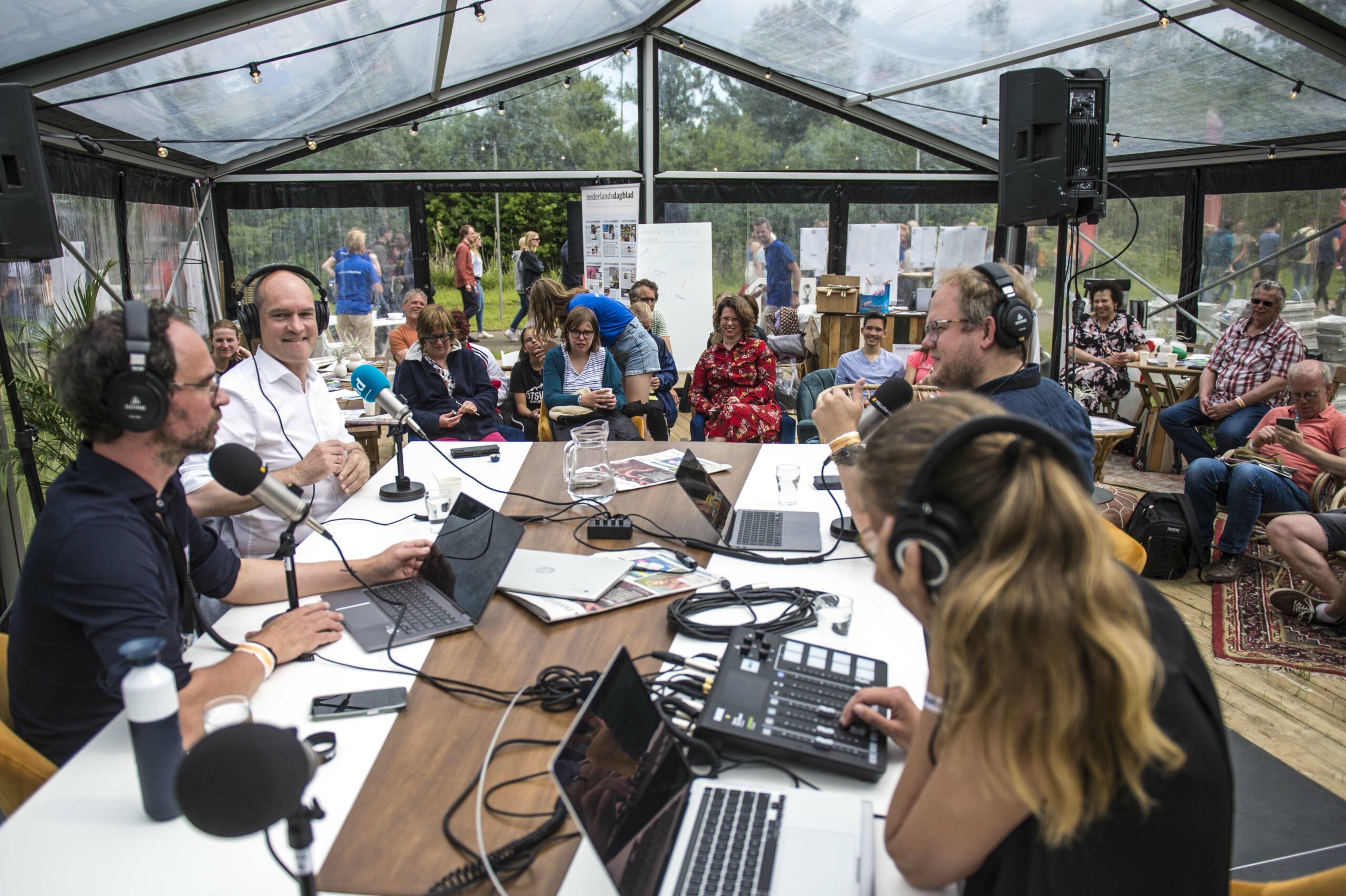 Main image: The team of Nederlands Dagblad recording a live podcast episode at a Christian conference.

Nederlands Dagblad is a national news outlet with Christian roots in the Netherlands, writing about Protestant and Catholic news. But in the Netherlands, there is also an evangelical group of Christians – about 200,000 of them – with no media outlet focussing on this group. ND saw an opportunity, and jumped right in: in the fall of 2021 it started to create content about and for Dutch evangelicals.

Publisher bio: Founded in 1944, Nederlands Dagblad is a national newspaper. It has a Reformed Protestant background but today, ND is a broad Christian newspaper. Located in Amersfoort, it is one of three independent newspapers in the country, owned by a Dutch company.

ND focuses on general news (domestic and international) and analyses current affairs from a Christian point of view. It also writes about politics, economics, art, culture, human rights and climate change. In 1996 it became the first Dutch newspaper with a website, and in 2011 it was the first daily newspaper in the Netherlands to implement a paywall.

Challenge: Increasing the subscriber base by targeting evangelicals

The challenge we address through Table Stakes Europe (TSE) is to accelerate the number of new Dutch evangelical subscribers by at least 50 percent. They are a new audience to us: we are getting to know them, and we are working passionately to create content that fits their lifestyle.

More broadly, TSE helped improve the way we organise digital work in the whole newsroom. Not just for our target audience, but for additional target audiences we will launch in the (near) future. Hopefully TSE will give every editor a strong yet gentle push towards digital transformation. Paper is expensive, and to survive as a newspaper (or better, a “journalistic entity”) our digital subscriptions need to increase.

We started by hiring a reporter to write specifically about evangelicals in the Netherlands. Marina is part of a well-known evangelical church in the country, she understands the community, and has a large network. One story at a time we made our current readers familiar with evangelicals.

Since the fall of 2021 we have been consistently writing all kinds of (news) articles, interviews and analysis for this audience segment, as well as starting a dedicated newsletter. That’s an early win. Just like a new series of stories: in February we started a new weekly interview series, called “Out of the depth,” where people share their struggles with (mental) health and their faith. The series is recognisable, almost all articles pop up in the most-read lists, and are made premium (only available to subscribers). The articles generate new readers for our newsletter, but not many new paying subscribers.

Another early win is that our online editor Robin had one-on-ones with every journalist to talk about the use of data. All journalists and editors receive a regular report of their articles’ CPIs (an index measuring a story’s performance, consisting of Exposure, Engagement and Loyalty). We are conducting detailed surveys to find out how they use these reports and – more importantly – what they think of them. We are absolutely confident that editors will use the reports more frequently when the data get a “human-like” translation – which means that we are experimenting with the framing of the numbers.

But the most important questions concern the psychological side of data: What are your thoughts and concerns about using data on a daily basis? Are you willing to let the numbers influence your decision making processes?

All of this has received a huge boost since the ending of pandemic restrictions. More people work in the office now. The online team is always there, and it is purposely positioned in the middle of our newsroom. This team has made it a habit to discuss headline writing out loud, which means that everybody in the newsroom is getting familiar with (at least snippets) of the attention and thought processes that go into thinking “digital first.”

Until August 2022 our digital team didn’t have an editor. Now that we do, the voice of the online team will be of equal importance in editorial meetings, which is an important win.

All of these steps contribute to a newsroom-wide understanding of why we use TSE for our evangelical audience. During the TSE-year, this has led to a steady growth of curiosity and enthusiasm among team leaders and editors – and a lot of them can’t wait to use the approach themselves.

What was challenging – But to be frank, during this process, we didn’t stop doing… well… anything, as we have so far focused on other aspects of the TSE process. But as of October 2022 we will have a small team specifically dedicated to digital transformation, consisting of two innovation managers and a data analyst.

We also found out that the “fear of blank pages” – the fear that there will not be enough content in the print paper – is very real and, above all, has a paralysing effect on any journalist who wants to work digital first. The print editors have the power, because they’ve always had the power. Currently, most of our articles are still written for print first.

Our TSE-goal is to increase the influx of new evangelical readers (500 new subscribers from this group in 2021, and the goal for 2022 is 750). In the second quarter of the year, our evangelical subscriptions were up by 63 percent.

One action that helped with this was the stand we had during the Pentecost weekend at the largest Christian conference in the Netherlands. This was a four-day festival with approximately 60,000 visitors a day. At the stand, we had our own programme with interviews with special guests, workshops and a live podcast recording. We tried to get email addresses for our recently launched evangelical newsletter, but that didn’t go as expected. Not at all. So we changed to selling subscriptions. That resulted in 250 new subscribers (33 percent of our goal for the year) at the conference. Our total number of evangelical subscribers is now at 475.

Our evangelical newsletter started with a dozen readers, and now we have 114 readers who receive the biweekly newsletter, created by Marina with a personal touch and her recommendations. We aim to have 1,000 readers by the end of the year.

Loyal and new readers respond very well to the evangelical stories on our website. They have the highest CPI of all the different sections, and also the “most article reads” of all the sections. This fall we aim to increase evangelical subscribers further to 75 percent of our goal.

Key learning from TSE
“What we learned and loved most without a doubt is the collaboration between the writers in the newsroom, the marketing department and the online colleagues. It has been a great learning experience to work closely together, and to improve our stories online and in the paper.”