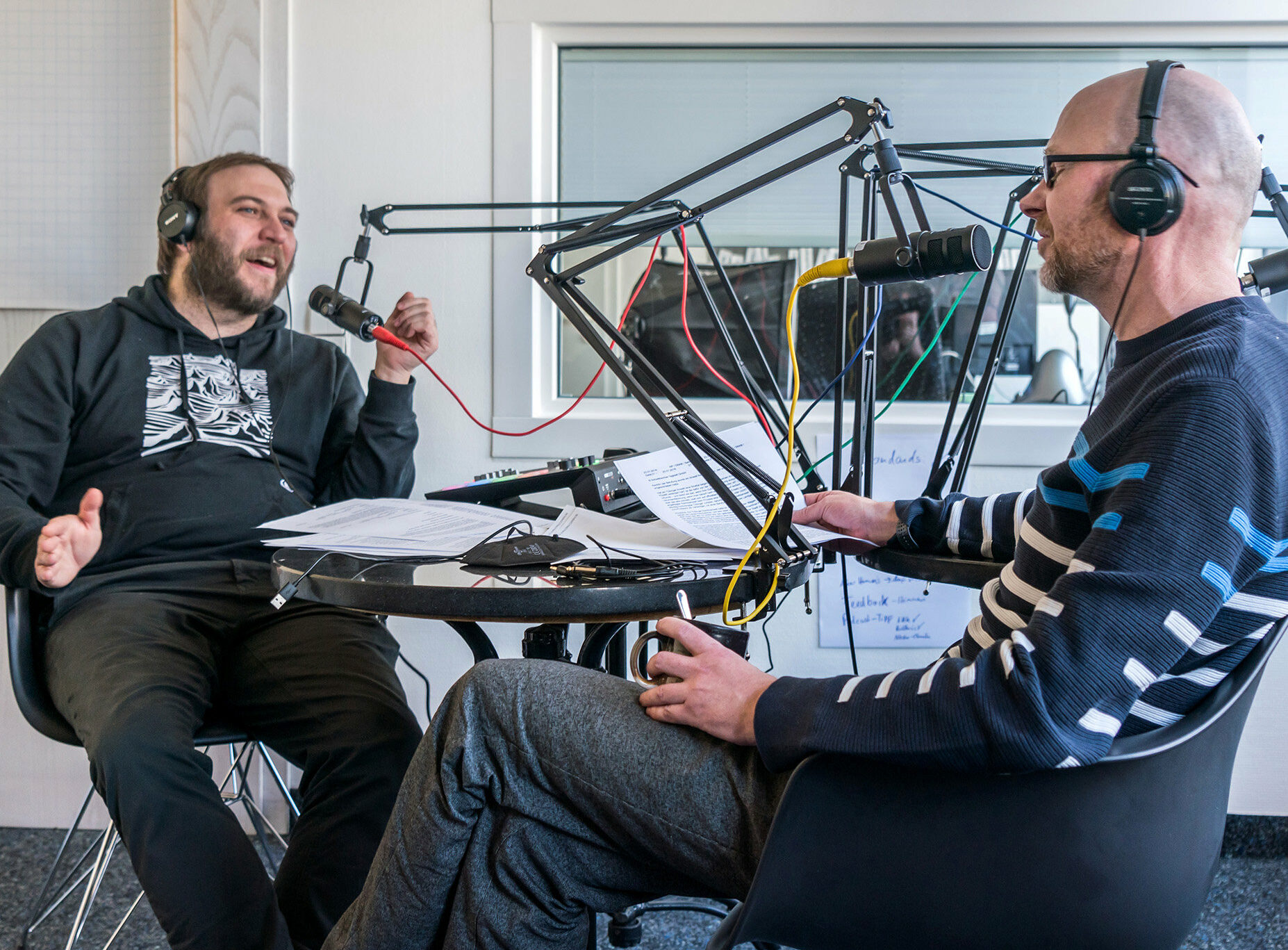 In the beginning of 2022, the newspaper based in Tübingen in southwest Germany launched its first audio product, a podcast called “Am Gericht” (“At the courthouse”). The show looks at issues related to crime and justice, and it has been particularly successful among women, young audiences, and current and future legal professionals in the region.

Publisher bio: Established in 1945, Schwäbisches Tagblatt is a daily newspaper based in the city of Tübingen with four additional offices across the Baden-Württemberg state in southwest Germany. For its national coverage, the newspaper uses content from Südwest Presse, an Ulm-based daily newspaper and Schwäbisches Tagblatt’s minority owner. In 2022, the newspaper had about 100 employees, and had 31,600 subscribers for its print edition and 3,800 subscribers for its e-paper and website.

Like many local newspapers, Schwäbisches Tagblatt (ST) aims to accelerate its digital transformation and wants to reach audience types that have been less likely to read the newspaper in the past. The publisher’s first podcast, launched in the beginning of 2022, has an important role in these efforts.

Called “Am Gericht” (“At the courthouse”), the monthly podcast discusses recent crime and law related stories from the region, while also exploring their broader societal implications.

The decision to focus the podcast on issues related to crime, justice and law came naturally from the interests of the newspaper’s audience: “We’ve always seen that this kind of coverage is of high interest to people,” says Jonas Bleeser, court reporter at ST and one of the two hosts of the podcast.

According to Bleeser, articles about crime cases in the region draw high levels of traffic consistently. Perhaps more importantly, many crime-related stories also drive at least one new subscription.

Moreover, many people in the region are interested in legal issues because of their current or future professional situation. Every year, 2,500 students study in the University of Tübingen’s faculty of law, and the regional high court is also based in the city. Meanwhile, the neighbouring town of Reutlingen has a large police headquarters.

“If you take the number of police officers working in this headquarters, and all the court prosecutors, law school students, lawyers and other people professionally involved in law in some way, there are several thousands of people,” Bleeser says. He also points out that these professionals are likely to have a level of income that makes them a promising target audience for newspaper subscriptions.

As for the choice to create a podcast, this seemed like a good opportunity to reach a different, younger audience than ST’s existing readership. Even if those younger listeners do not subscribe now, they might do so later in life: “If they have connected with our brand in the past, we hope of course that they will trust us in the future. And the podcast is a good way to have positive brand related contact.”

The podcast episodes also aim to drive interest in crime-related stories on ST’s website, and since most of those are behind the paywall, this will hopefully encourage these new audiences to consider taking a subscription.

Decisions: Refining the concept and workflow, and looking for sponsors

Although Bleeser had been a guest on another crime podcast “Akte Südwest” (“Southwest File”), “Am Gericht” was ST’s first in-house audio project, so the first step for creating it was getting the right equipment. This was handled by the publisher’s Head of IT, who still provides technical support for the podcast.

Bleeser, who describes the podcast as his “passion project,” handles the editing. He specifically highlights a post-production tool called Auphonic, which automatically optimises a recording’s audio quality. This actually was a tip from the audience after a few episodes. “One of our listeners told us, ‘Your audio quality is really bad. Why don’t you use Auphonic?’ So I replied, ‘Great, of course we will use it. Thank you very much!’ ”

In terms of a typical workflow behind each episode, Bleeser starts by choosing a topic and related articles he has written, and shares those with Lorenzo Zimmer, Editor at ST and co-host of the podcast. Together they come up with different talking points and a broader theme they want to address through the specific cases.

“Every criminal case we cover is also about some ‘meta’ theme,” Bleeser explains. “So if we look at criminal cases between car drivers and cyclists, we would also talk about the conflict between these groups generally, why it is important that we talk about whether cars take too much space on our streets, actions and behaviours against climate change, and so on.”

The two hosts recorded the first episodes unscripted, but they have also experimented with writing a detailed script before the recording. For the most recent episodes, they have used an approach that is somewhere in between, allowing the conversation to have a spontaneous feel while still following a plan.

“Now we try to do it with mind-maps, where we decide before recording what we want to talk about, how we tell the case, and when to get to the aspects that are beside the case,” Bleeser says.

“Our Head of IT always says, ‘I want you to sound as if you’re sitting in the back of my car and talking about this case.’ Of course, we’re not only trying to entertain, we are also trying to explain how the legal system works, what the rules are, why they are important, and so on.”

As for audience feedback, Bleeser says that comments and ratings have been positive from the start. Moreover, the first two episodes were featured on Spotify’s much-coveted top 50 chart, and the first episode alone reached more than 1,800 listeners. “That of course was highly motivating. We would have been happy with three or four hundred!”

What has been more challenging than expected is finding sponsors. The team has explored some concrete ideas (for example an insurance company that could promote a law insurance product), but Bleeser says it takes time to convince big companies to advertise in a newly established podcast.

For now, the podcast has had one sponsor, a local theatre that promoted a play about how impostors fool their surroundings by pretending success and wealth. The theatre will also return as a sponsor in some later episodes, and the team has also found a health insurance company as sponsor for the next three episodes.

Outcome: Reaching an audience beyond the newspaper’s usual readership

In terms of audience figures, the podcast has more than 2,600 regular listeners across Spotify and Apple. Added to that are the people listening directly on ST’s website (over 4,500 plays during the past three months), but Bleeser says the data doesn’t specify how many of them follow the podcast regularly.

Digging deeper into statistics, Bleeser notes that according to Spotify’s detailed listener data, two thirds of the podcast’s listeners are women. Moreover, two thirds are younger than 45 years old. The contrast to the newspaper’s usual readers – who are “mostly older than 65,“ according to Bleeser – is significant.

“So that’s really a younger audience than our newspaper’s audience is, and of course that’s why we’re doing this. We want to reach people who are not even close to the newspaper yet.”

Bleeser also points out that the podcast has had a positive impact on his everyday work as a court reporter. It turns out that many legal professionals in Tübingen are regular listeners, and they now recognise him from the podcast.

“I talk a lot with lawyers and prosecutors and judges when I’m at court. Sometimes when I go to a young lawyer I don’t know yet, they say, ‘Ah, you’re the guy with the podcast!’,” he says. “So sometimes it’s a door-opener, that people know the podcast and they know my voice.”

“I always ask them if they like the podcast. And most of them say they like it because all the law related stuff is accurate. We’re trying to be very accurate, so that the professionals acknowledge that we’re doing good journalistic work with a high accuracy. And they really appreciate that.”

Beyond its immediate target audience, “Am Gericht” is also gaining another type of recognition: the podcast was a finalist in the Audio category of WAN-IFRA’s European Digital Media Awards 2022.

As for the next steps, the crime audience team will launch a newsletter in the autumn of 2022, which will promote the podcast as well as featuring ST’s articles related to law and order. “We’re of course hoping that people reading the newsletter will find a lot of interesting content on our website and are more likely to take a subscription.”

“I really appreciate the “good enough to get going” approach. And I’m convinced that this is an important learning for us, that we don’t have to over-analyse everything, to over-plan everything before you start. Just do it – and learn by doing. That is for me a great learning.”