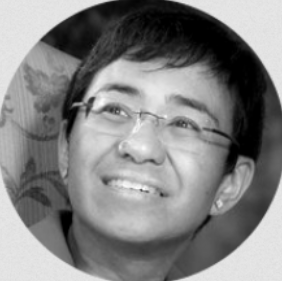 A journalist in Asia for nearly 35 years, Maria Ressa co-founded Rappler, the top digital only news site that is leading the fight for press freedom in the Philippines. As Rappler’s executive editor and CEO, Maria has endured constant political harassment and arrests by the Duterte government, forced to post bail eight times to stay free. Rappler’s battle for truth and democracy is the subject of the 2020 Sundance Film Festival documentary, A Thousand Cuts.

Before founding Rappler, Maria focused on investigating terrorism in Southeast Asia. She opened and ran CNN’s Manila Bureau for nearly a decade before opening the network’s Jakarta Bureau, which she ran from 1995 to 2005. She wrote Seeds of Terror: An Eyewitness Account of al-Qaeda’s Newest Center of Operations in Southeast Asia and From Bin Laden to Facebook: 10 Days of Abduction, 10 Years of Terrorism.