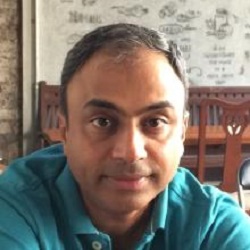 Ajay Chacko is Co-founder & CEO of Arré, one of the country’s foremost original digital content brands. Arré was founded in 2015 by B. Saikumar, Ajay Chacko & Sanjay Ray Chaudhuri. Arré offers multimedia content across genres & formats and has won many international & domestic awards & accolades for its work in digital fiction & non-fiction. Arré Studio is also working on large-format original shows in collaboration with domestic and international OTT platforms as well as broadcast television networks.

Ajay has over 2 decades  of experience in media & financial services. He spent over a decade with Network18 and was Group COO and also President A+E – TV18 JV in his last-held roles with the Group. He has also worked with IL&FS, Sharekhan and the Indian Express Group prior to his stint with Network18.