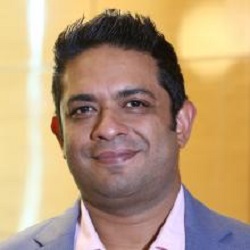 Bharat Gupta is the Chief Executive Officer at Jagran New Media (digital arm of the India’s Largest Print and Radio Publisher Group, Jagran Prakashan Ltd). With over 100+ Million Users, Jagran New Media (JNM) is amongst the Top Internet Media Groups in India. Bharat has to his credit, 20 years of rich experience in managing and turning around several media businesses across Print, Radio, Ground Activation & Internet. Under his leadership, Jagran New Media is now the fastest growing News and Information Company in the Indian Digi-tal landscape and has received more than 16 awards and recognitions in 2019 itself. The company has also launched India’s first Hindi Fact Check Website ‘Vishvas.News’ in December’18 and has now expanded into 11 Languages.

In addition to his role as CEO, Bharat is also serving as Director to the INMA South Asia Board (International News & Media Association); he is a Governing Council Member at IAMAI (Internet And Mobile Association of India), founding member of Digital News Publishers Association (DNPA) and on the board of the esteemed International Fact Checking Network (IFCN). He has also represented Indian digital media publishers at many global industry forums like WAN-Ifra, YouTube Publishers Forum, GNI, and Newsgeist Asia, where he has been actively ideating on Audience and Revenue Growth opportunities for the sectors in the region. In recognition of his achievements he was awarded ‘Youth Achievers Award’ at the Sixth Global Marketing and Social Media Awards, 2014.