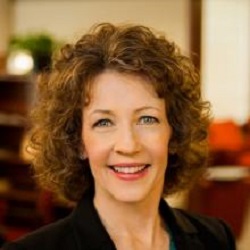 Donna B. Hall is the Publisher of The Atlanta Journal-Constitution (AJC) and a veteran media executive with more than 30 years of experience with Cox Enterprises’ radio, tv and newspaper brands.

Prior to June 2019, Hall was VP of Marketing, Radio and Newspaper Operations for Cox Media Group (CMG) Atlanta, which included running the flagship newspaper that reaches more than 2.3 million adults each month across its print and digital products.

She also served as Vice President and Market Manager for CMG Atlanta and Athens radio stations since 2014. In Dayton, she was the Sr. Vice President of Marketing and Client Solutions when the company integrated its radio, TV and newspaper operations in 2010. A recognized industry leader, Hall was inducted into the Dayton Area Broadcasters Hall of Fame in 2019 and has been named as one of Radio’s Most Influential Women by Radio Ink numerous times.