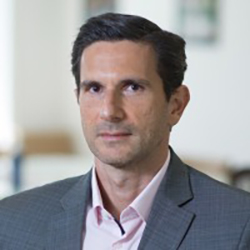 Frederic holds a degree in Economics from UFRJ (Federal University of Rio de Janeiro), an MBA in Finance by IBMEC and a PGA from Insead.

He began his professional career at Deloitte Touche Tohmatsu, where he worked for three years.

In 1997, he joined Grupo Globo, as a financial analyst for Infoglobo, the newspaper company of Grupo Globo. With the acquisition of the Diário Popular newspaper in 2001, he became CFO of the publication in April of that year.

In the following year, he joined Editora Globo – the magazine company of Grupo Globo, also as a CFO in order to conduct the company’s turnaround. In January 2008, he took over as company CEO and since then he has been working on the transformation of the digital business and on portfolio increase with new magazine and brand launches.

He was responsible for the creation of Edições Globo Condé Nast, a joint venture between Editora Globo and Condé Nast, in July 2010.

In May 2015, in addition to his role as CEO of Editora Globo, he was also appointed CEO of Infoglobo and in 2016, he became CEO of the Valor Econômico newspaper, thus, becoming Grupo Globo’s Managing Director for Print Media.

He was president of the Brazilian Association of Magazine Publishers (ANER) between 2012 and 2016 and is a Board Member of INMA (International News Media Association) and IVC (Brazilian Audit Bureau of Circulations).