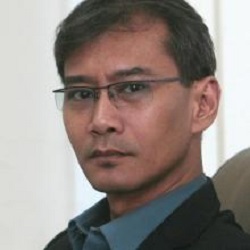 Meidyatama Suryodiningrat was appointed by President Joko Widodo as head of the national news agency, LKBN Antara, in January 2016. In its eighth decade of service, LKBN Antara is not only one of the main arms of government public communications with a network of over 34 bureaus across the archipelago, but also the largest content distributor of news content in the country to over 250 media and other government and private offices in Indonesia and abroad.

As president director of LKBN Antara, he also serves as chairman of the board of commissioners of PT IMQ Multimedia Utama, and PT ANPA International.

With a background in journalism spanning 18 years, Mr Suryodiningrat, who is also known as Dymas, was previously the Editor-in- Chief of The Jakarta Post. He also worked for two-years outside of journalism as an analyst for a Jakarta-based strategic consulting firm engaged in government and community relations.
He is a former research fellow at Harvard University’s Weatherhead Center for International Affairs, in Cambridge, Massachusetts. He received a bachelors degree (majoring in Political Science and History) from Carleton University in Ottawa, and attended graduate school at Dalhousie University, Halifax, Nova Scotia.