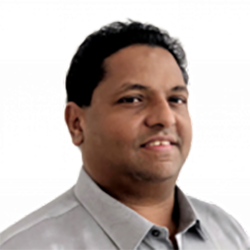 He started his career as a journalist in The Straits Times in 1995, after graduating from the National University of Singapore with majors in Political Science and Sociology. He left the paper in 1999 to help start the Today newspaper at MediaCorp, where he helmed
various desks including Sports, Backbench and News, rising to become its Day Editor and No 2. In 2007, he was asked to return to the SPH family as Associate Editor at The New Paper, where he also took on various roles including Sports and News, before becoming Deputy Editor. In 2018, he moved to a managing role for the EMTM Group where he has led various projects including the revamp of the newsroom as well as the redesign of all of The Straits Times products in 2020.

Murali is also the head of its SPH Media’s book publishing arm, Straits Times Press. A keen golfer and former sportsman, he is married and has two children.