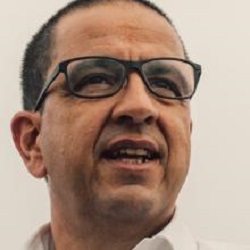 Peter Kabel is a professor of interactive media design at the Hamburg University of Applied Sciences. He is founder of several successful companies in the area of media, technology and design – among others: „Büro Hamburg GmbH“ (1991), „Trendbüro Hamburg GmbH“ (1993), „Kabel New Media AG“ (1993) and „Tone Consultants GmbH“ (2001).

From 2004 to 2007, he acted as member of the board of „Jung von Matt AG“, one of the most influencial advertising agencies of the German speaking countries. Since 2007, he has been involved in portfolio management of Lakshmi GmbH – a private equity and vc-firm based in Hamburg. Peter Kabel is partner in investment and consulting firm AECAL GmbH based in Hamburg, Germany.

Peter Kabel teaches as full professor at „Hochschule für angewandte Wissenschaften Hamburg“ and has received many mentions for innovation and creativity– inter alia he was decorated as „Entrepreneur of the Year 2001“, an international award founded by Ernest&Young and Deutche Börse AG.