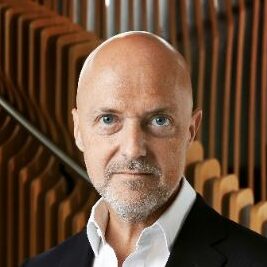 Pierre Louette has been Chairman and CEO of Les Echos – Le Parisien, the media division of LVMH Group, since March 2018. The group’s media activities are focused on three key ideas: the promotion of quality journalism, the creation of value in the digital world and the diversification of its brands into new areas (services, e-commerce, events…). Pierre Louette was also elected President of the Syndicat de la Presse Quotidienne Nationale (SPQN) in July 2020 and President of the Alliance de la Presse d’Information Générale (APIG) in October 2020. In February 2021, he published a book: “Des géants et des hommes” (éditions Robert Laffont). How to end the hold of the GAFA on our lives.

From 2010 to 2018, he was Chief Operating Officer of the Orange Group and a member of its Executive Committee. He was notably in charge of Orange Wholesale France, the Group’s wholesale business, the Purchasing function and the Corporate Secretary’s Office. From 2015, he was also in charge of Orange’s investment strategy in start-ups.

In 2000, he joined the Arnault Group to manage Europatweb, the Internet investment fund created by Bernard Arnault. Previously, during his time at Havas Advertising, he founded and managed the ConnectWorld agency and the Interactive Marketing of the group between 1996 and 2000.

Pierre Louette began his career at the Cour des Comptes (French Court of Auditors) and then served as Technical Advisor for Communication, Youth and Sports to Prime Minister Edouard Balladur, before joining France Television as Secretary General and Director of Communications.

Pierre Louette holds a law degree from the IEP (Institut d’Etudes Politiques de Paris – Sciences Po) and ENA (Ecole Nationale d’Administration) and is a former Senior Advisor of the Court of Auditors, knight of the Legion of Honor and Officer of the National Order of Merit.

He is a member of the Board of Directors of the Réunion des Musées Nationaux – Grand Palais, and of the Supervisory Board of Rocket Internet (Berlin).