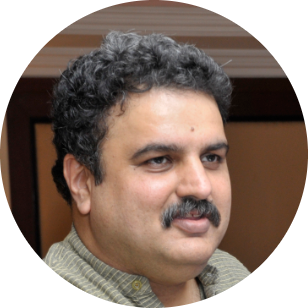 Pradyuman Maheshwari is a senior editor and media commentator having worked with a variety of media entities for over 30 years. He has worked with The Indian Express, Mid-Day (where he was Editor and also Head of Interactive Services), the Sakal group in Pune, the now-defunct DNA where he was on the Editorial Board and Senior Editor and Group Chief Editor, exchange4media.com. Since nine years, he turned entrepreneur with MxMIndia, a web-based publication tracking the media and advertising. He is also a serial entrepreneur, and in addition to various other things is also editing an online magazine for senior citizens.

His first tryst with the digital media was in 1996 when he set up the website for Mid-Day’s coverage of the World Cup. Since then he has been active on the internet space having set up Mid-Day Interactive and then with the leadership team of Aptech Internet. He has been on the jury of the Advertising Club Bombay’s interactive categories for over a decade and is an academic associated with many educational institutes. He is on the Consumer Complaints Council of the Advertising Standards Council of India and is one of the early evangelists of the internet and convergence. He lives in Mumbai with his wife, daughter and many digital devices.