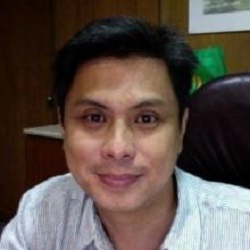 Roby Alampay is the founder and chairman of Puma Public Productions, a first-mover in the Philippines and Southeast Asia in non-music audio productions.

On the business and managerial side of the industry, Roby was raised in print and built up the online news portal for a broadcasting network (TV5), eventually rising to the rank of VP, while simultaneously helming under the same media conglomerate, as editor-in-chief, the Philippines’ oldest and biggest business daily (BusinessWorld) and charged with giving it a digital strategy, and help it get back in the black. Previously, he also anchored the nightly newscast ‘The Big Story’ on Bloomberg Philippines and co-anchored ‘The Chiefs’ on One News TV 5.

At the end of 2019, he left all these executive corporate positions to focus on my own startup. Puma Public is a production company servicing news/media organizations, businesses, NGOs/CSOs, foundations, and even individuals looking to explore and expand their brands and content into streaming audio.

Roby’s career has always been in journalism, with values fully anchored on press freedom and media independence. He was the first executive director of the Southeast Asian Press Alliance (SEAPA) and currently serves as Regional Advisor for the Asia Program of International Media Support (IMS) in Copenhagen.