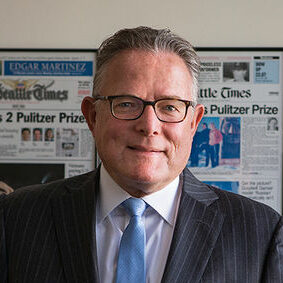 David Boardman is Dean of the Klein College of Media and Communication at Temple University in Philadelphia. He has academic and financial responsibility for one of the largest and most comprehensive programs of its kind, with some 2,500 students and 200 faculty members.

Since joining the college in 2013, Boardman has led major strategic initiatives that have raised its profile, resources and standing. He was recently named the 2022 Administrator of the Year by the Scripps Howard Foundation and the Association for Education in Journalism and Mass Communications.

In 2018, Klein College received the nation’s top Equity and Diversity Award from the Association for Education in Journalism and Mass Communications. In 2018 and 2022, Temple University Television, an enterprise of the Klein College, was named the nation’s best college television station by the Intercollegiate Broadcasting System. Previously, Boardman was Executive Editor and Senior Vice President of The Seattle Times, the largest news organization in the Pacific Northwest. Under his leadership, The Times won four Pulitzer Prizes and produced 10 Pulitzer finalists. Boardman personally has been the recipient of numerous other major national awards, including the National Ethics Award from the Society of Professional Journalists, the Goldsmith Prize in Investigative Reporting from Harvard University, the Worth Bingham Prize in Investigative Reporting, the Investigative Reporters and Editors Award and the Associated Press Managing Editors Public Service Award.

Boardman is founding chair of the Lenfest Institute for Journalism, the nonprofit that owns The Philadelphia Inquirer. He also chairs the nonprofit news site The Markup, which is focused on the nexus of technology and society. He is the immediate past chair of the Reporters Committee for Freedom of the Press, and is a member of its Executive Committee. He also serves on the boards of the Solutions Journalism Network, the American Society of News Editors Foundation and the Organized Crime and Corruption Reporting Project. He sits on the advisory boards of ProPublica, the New England Center for Investigative Reporting and Investigative Reporting Denmark. Boardman serves on the Accrediting Council for Education in Journalism and Mass Communication and is its immediate past president. Boardman also is a past president and board member of Investigative Reporters and Editors and of the American Society of News Editors, and served as chairman of the National Advisory Board of the Poynter Institute for Media Studies. He is a Poynter Ethics Fellow. He is a former member of the Sigma Delta Chi Foundation Board and has served six times as a juror for the Pulitzer Prizes.

Boardman has conducted seminars for journalists in Austria, Belgium, Bosnia,
Bulgaria, the Czech Republic, Denmark, Hong Kong, Israel, The Netherlands, Poland,
Slovakia, South Africa and Turkey. Before joining The Times in 1983, Boardman was a reporter and editor at several papers in the Northwest, and worked on a construction project in Liberia, West Africa. He is a graduate of the Medill School of Journalism at Northwestern University and has a
graduate degree from the University of Washington. He is an inductee of both the Medill Alumni Hall of Achievement and the University of Washington Communications Hall of Fame.

He has volunteered as a youth basketball coach and has served on advisory boards supporting music and journalism programs in public schools. He is married to Barbara Winslow Boardman, a writer and editor. They have two daughters. He enjoys kayaking, hiking, yoga, reading, cooking, wine, travel, music, and cheering on the Temple Owls and the Northwestern Wildcats.