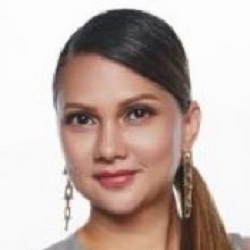 Michelle Martin is a 20-year veteran of the talk-radio industry and daily host on personal finance issues on SPH Radio’s MONEY FM 89.3.

Michelle has won many awards for her work. Most recently she was part of the team that won an award for their live television coverage which saw Michelle helm the commentary desk for Singapore’s last General Elections. The coverage won “video of the year” at Singapore Press Holdings’ annual awards which honour the best of journalism across SPH newsrooms.

Michelle’s insightful conversations with newsmakers earned her two Journalist of the Year nominations in 2014, including one at the Asia-Pacific wide Women Empowerment Journalism Awards.

Michelle’s voice is a recognisable one; public votes saw her nab two back-to-back wins at the Singapore Radio awards

Michelle has thrice hosted the National Day Parade television broadcast, spoken at TEDx Women Singapore and trekked to Mt. Everest Base Camp to raise funds for female survivors of war, poverty and injustice.