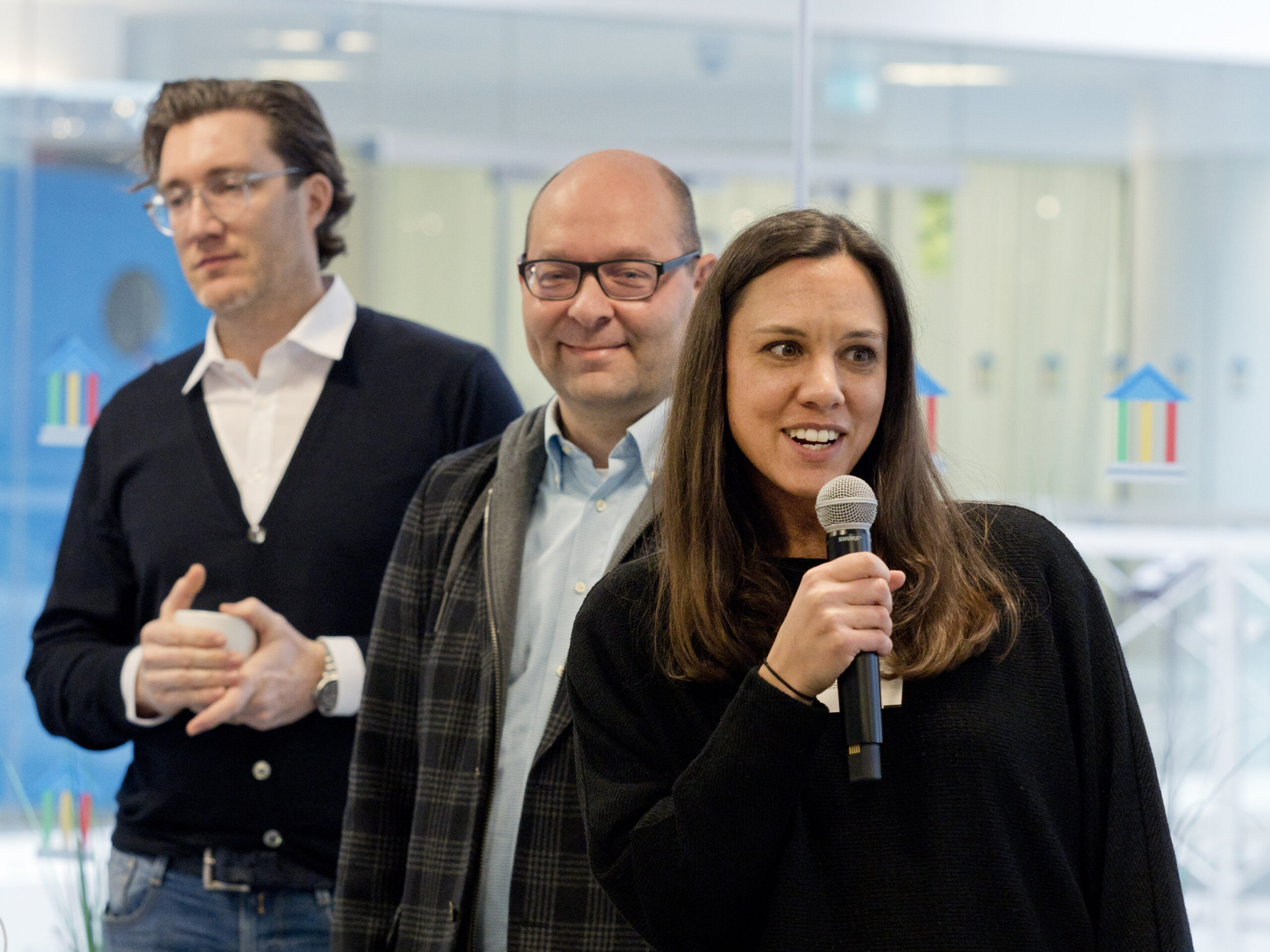 Main image: Martin Wilhelm, Managing Director (left), and Catrin Weykopf, Head of Online and Digital Development (right), presenting their project during a Table Stakes Europe session at the Google Academy in London in 2020.

During its participation in Table Stakes Europe in 2019–2020, the German newspaper made significant progress in establishing a new digital-first, audience-focused workflow. Since then, the publisher has continued to innovate on how it covers local news, and it has created a new product – an evening news summary – that matches its readers’ interests and habits. 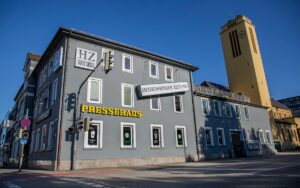 Publisher bio: Heidenheimer Zeitung is a German regional daily newspaper based in the town of Heidenheim and covering the district of the same name, located in the southwestern state of Baden-Württemberg. In 2021, the newspaper had a paid daily circulation of over 22,000 copies in print. The company has 90 employees, of which 30 work in the newsroom. (Image source: Heidenheimer Zeitung)

When Heidenheimer Zeitung (HZ) joined Table Stakes Europe in 2019, the newspaper’s main objective was to accelerate its digital transformation. Key to this was transitioning from a print-driven workflow to publishing more articles online throughout the day, while also identifying specific audiences to serve with its journalism. HZ also aimed to reach 1,000 digital subscribers, and improve audience and digital skills among its journalists.

These goals were mostly reached. These days most of HZ’s content is published first online, and the newsroom’s digital capabilities have greatly improved. The publisher has also seen a strong increase in digital subscriptions, but it has also struggled with a high churn rate: today, HZ has more than 700 digital subscribers, says Catrin Weykopf, who is responsible for HZ’s online edition and digital development within its editorial management team.

Readers can opt in to receive push notifications on any of these topics, and there are also dedicated newsletters for the FC Heidenheim fans; the people interested in shopping, eating and leisure; and the commuters.

Weykopf says these audiences have a central role when the newsroom meets every Monday to discuss the plans for the coming week.

“We put markers in different colours for the topics that will be written about during that week,” she says. The colour coding makes it easy to see when content for a specific audience will be published, and if the plans include enough content for all audiences. “For example, we might see that there’s only one upcoming piece about traffic, so we know we should do at least one more.”

Initially HZ was concerned that the audience group interested in local amateur football might be too small, but this has turned out to be a very loyal and engaged audience. Weykopf says that reporting – and especially photo galleries – from local games have been successful in terms of generating new subscriptions.

The audience-first approach to covering a new supermarket

When it comes to transitioning to more digital-centric workflows, Weykopf says being a small publisher is both an advantage and a drawback. Thanks to having little hierarchy, HZ is able to make quick decisions and act faster than some of the bigger publishers. The downside is that they lack some of the more specialised skills you might find in bigger newsrooms.

“For example, we don’t have a data analyst. So when it comes to tracking and metrics, we have to do it ourselves,” Weykopf says, adding that she has learned to use Google Data Studio to generate and distribute reports about their website’s performance.

Regarding metrics, the newsroom tracks the articles that were written for the specific audiences to monitor their performance and how much engagement they generate compared to other content.

According to Weykopf, the data shows that audiences-related contents adds up to 60 % of the content that subscribers consume per day – up from 40% when they began tracking this. “I think that’s a success, because that’s more than half.” (For non-paying readers, the figure is between 40% and 50%.)

Audience-first thinking has also influenced the way HZ approaches reporting about local news. Weykopf gives a concrete example of how they covered a recent event in their community: the opening of a new supermarket.

“Before, we would have gone to the advertising department downstairs and said, go there and sell ads,” she says. “Now, there were photographers going to the opening to take pictures, and we had three articles about the supermarket: one the day before opening, one on the day of the opening, and one a week after.”

“We asked the manager of the supermarket if they were satisfied with the number of customers, and we asked the customers what they thought of the new supermarket. Three years ago, no one in this newsroom would have written stories like that!”

There was a lot of interest in the stories about the supermarket, and the photo galleries even generated a few new subscribers. “It makes sense: people are curious but don’t want to go because they think there will be too many people at the opening. But they can just click on the pictures and see what it looks like.”

Another example of how HZ has adapted its content strategy to fit its readers’ needs is its daily news briefing. This had its origins in the COVID pandemic: soon after HZ started covering the topic, they realised that the amount of content they were publishing about it was too much for most readers.

This led to the launch of an evening summary, featuring relevant articles about the evolution of the pandemic. This daily brief, published on the website and distributed through push notifications and social media, was very popular among readers.

As news about the coronavirus slowed down in the summer of 2020, HZ expanded the evening summary to cover also other important news of the day. At this point the daily summary also went behind the paywall, having previously been freely available.

“In the beginning we had a remarkable number of subscriptions thanks to this summary. When it went behind the paywall, it became a very important element for the bottom of the funnel,” Weykopf says.

Most days, the daily brief is HZ’s most read article of the day. “People really have adopted this rhythm of consuming the news. They wait for this piece to be published in the evening, and they can have the full summary of the day,” Weykopf says.

As the war in Ukraine continues to unfold, HZ is drawing from its learnings from Table Stakes Europe in determining how to cover the conflict. From the start, the team created a new tag that allows them to track stories related to Ukraine. This lets the editorial team monitor how readers engage with the topic.

“In the long run we can see if people are more interested in the emotional stories, or the economic aspects of the crisis, for example. It’s really important to follow this, since it will allow us to react to our readers’ interests,” she says.