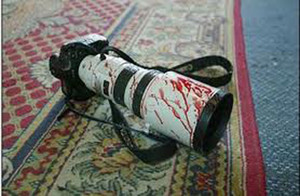 The World Association of Newspapers and News Publishers recorded 68 journalist deaths in 2012, with the on-going Syrian conflict responsible for the highest number of casualties. The by-product of a globally connected age may be an insatiable desire for information, yet the sad truth is that journalists continue to die gathering it.

While the causes vary, the common thread, according to Guy Berger, Director of the Division of Freedom of Expression and Media Development at UNESCO, is that “killers are not being brought to book.”

The word for this is impunity – a failure of justice and a measure of just how broken a society can become. Impunity for those who attack journalists – whether the perpetrators are criminals, terrorists, or government officials – sends an institutionalised message that it is acceptable to target those who speak out or reveal uncomfortable truths. It discourages investigation and silences critics, devaluing the watchdog status of the press over governing institutions. It allows the powerful to ride roughshod over our rights and freedoms.

Worse still, impunity perpetuates similar attacks, year after year. In the decade between 2002 and 2012, at least 801 journalist deaths have been registered.

If the same deadly statistics existed in any other profession, one that had such an impact on how we define and understand our world, one suspects the outcry would be emphatic, the investigations relentless, and the commitment to reversing the trend universally forthcoming.

As well it should be.

Imagine for a moment politicians, lawmakers or religious leaders similarly targeted, with such frequency, in such repetitive circumstances. Just think what impact that would have on these sectors of society, and how it would affect your own passage through the world.

The media, in the role we have come to expect of it – in the guise of the Fourth Estate – is no exception.

Clearly, in some areas of the world, so-called war-ravaged or failed states, such a universal breakdown is a reality. 16 journalists killed in Syria this year, 14 in Somalia – while no less shocking – can, in overly simplistic terms, be blamed on a total lack of the rule of law.

Similarly, the notion that journalists are reckless, or that cash-strapped news organisations are ethically questionable for relying on freelancers or local stringers, addresses the symptoms without attacking the cause.

Indeed, the issue of safety “needs to be part of the conversation and culture at many levels,” according to Hannah Storm, Director of the International News Safety Institute (INSI). This is a widely supported belief, one that is gathering increasing momentum within the global media industry.

All well and good for large or well-funded outlets, but as Pakistani journalist Umar Cheema believes, neither government in Islamabad nor local media houses have put in place updated safety precautions for those reporting from Pakistan’s many – and varied – frontlines. Equipment such as cameras may be insured, but the concept of life or health insurance for journalists remains anathema.

Such attitudes spur media rights groups across the globe to raise awareness of journalist safety, from the boardroom to out in the field. The United Nations Plan of Action on the Safety of Journalists, endorsed in November 2012, carries the expectation that the UN and its member states will engage civil society and media to tackle issues related to journalist protection.

But when impunity pockmarks the environment, the independence of the judicial system is questioned, and security services and political authorities are mired in corruption there is no level playing field for anyone, least of all journalists. Corruption maintains a rotten system, whether it is financially, ideologically or power driven. In such contexts, the powerful see journalism as an inconvenience. The easiest solution is to eradicate the journalist.

It sends a potent message to the media, who will inevitably self-censor or remain silent over contentious issues, as well as out into wider society; this is how things are, do not question them. The quality and depth of information available diminishes, checks and balances divested upon our media become meaningless, its public service role impossible to perform.

Any individual, organisation or institution connected to the murder of a journalist, and that remains at liberty today, reinforces this.

The notion of ‘getting away with murder’, in whatever context, challenges our perceptions of just what kind of a society we live in. We are far less comfortable when a journalist operating within a democracy is murdered with impunity, as it brings the idea of chaos too close for comfort.

For the story continues, leaving behind a dead journalist. All the legislation in the world cannot account for a lack of genuine commitment to ending impunity. “In the chaos that exists in Mexico, journalists are easy, vulnerable targets,” says journalist and writer, Anabel Hernández.

Despite all the changes to the law to create special prosecutors in Mexico, “journalist murders have not stopped,” she says. “Such initiatives haven’t done any good because there is no will to make the laws and programmes designed to protect journalists actually work.”

In Mexico, as anywhere else plagued by impunity, this is because the very people meant to protect journalists are often the ones committing the most horrendous crimes against them.

The sadness felt when a colleague is lost in the line of duty is universal. The reflection it invokes resonates throughout any profession, and requires little explanation. Yet the repetition in the root causes behind journalist deaths points to a systematic betrayal of justice, no matter where such murders occur. Are journalists to be seen as dispensable, so long as the 24/7 agenda is fulfilled? Perhaps a gap in service, a break in transmission, or a blank page once in a while would better spell it out.

How many deaths it will take to reverse the perception that there is no price to pay for silencing a journalist is anyone’s guess. Any death is a tragedy. Many deaths are simply incomprehensible. But death repeated for the same reason, over and over and over again, is simply a moral outrage.