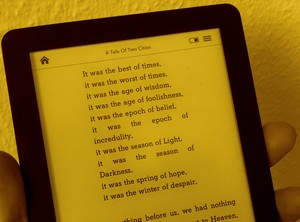 This should be boom time for the e-reader.

The end of 2012 saw a glut of new ‘front-lit’ e-readers Kindle Paperwhite, Nook Glowlight and the Kobo Glo. All of these devices offer touch screens, Wifi (some even 3G) and a new  technology that projects light from the side or top of the screen, avoiding backlighting to simulate a less obtrusive ambient light.

Yet in his outlook on 2013, Walt Mossberg (@waltmossberg) mentions in passing that tablets are “gradually replacing another device: the dedicated e-reader“.

So is Mossberg’s statement true? Just as the e-reader evolves, the tablet has usurped it?

Japan already saw a similar phenomenon back in 2006 with keitai books (where ‘keitai’ means ‘mobile phone’) reaching 60m sales in that year and perhaps explaining why e-readers remain practically unknown.

The e-book is certainly alive and kicking on tablets and according to the same research from Pew, those “most likely to read an e-book included people with college or graduate degrees, those with households incomes more than $75,000, and folks between 30 and 49 years old”.

So maybe the core tablet demographic is more likely to have experienced an e-book, but who is doing the most reading?

According to schools.com, readers who have an e-book device read on average 9 more books per year than those without one. And their own data shows that baby boomers (50-64) are 19% more likely than other groups to own an e-reader.

So the conclusion seems to be: young people are migrating faster to e-books, mainly on tablets, but baby boomers continue to read more. And therefore with their traditionally older demographic, news publishers cannot ignore the e-reader market.