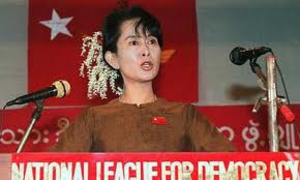 Beginning 1 April, newspapers in Myanmar will be able to publish daily, the first time since 1964. Previously, state-owned newspapers were the only dailies allowed to print. Decades-long restrictions on private papers were put in place by a junta regime to rule out any public dissent.

The news was first announced in September and is one of the many reforms under President Thein Sein, elected in 2011. The government ended media censorship in August and soon followed by announcing that daily newspapers would be allowed in April. Censorship was applied to everything from newspapers to song lyrics and even fairy tales.

Journalists in Burma were some of the most restricted in the world, subjected to routine state surveillance, phone taps, imprisonment and censorship so intense that independent papers could not publish on a daily basis. Even photos of Aung San Suu Kyi were barred.

Myanmar opposition leader Aung San Suu Kyi announced that her newspaper is one of many publications planning to run daily. Suu Kyi’s paper, the D-Wave, is currently published weekly and focuses on the National Democratic League’s activities.

“Newspapers are really important because they are the mirror of the people,” said Nyan Win, a spokesman for Suu Kyi’s National League for Democracy told AFP.

Last week, a proposed bill that would restrict publishers was shot down due to imense criticism from journalists. The bill would have banned reporting on topics such as criticism of the military-drafted 2008 constitution, and would have prohibited publication of any news that could “disturb the rule of law,” “incite unrest,” or “violate the constitution and other existing laws.”

Despite these advances, the country ranks 151st out of 179 in the 2013 ranking of press freedom.