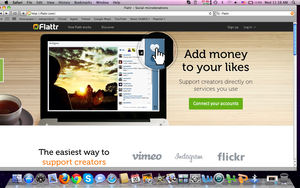 Listly helps create and embed lists, letting readers vote items up or down, suggest new items, and share specific items on the list with their social networks.

Kellet believes Listly has the potential to help journalists and bloggers connect with their audience, rather than just leaving comments.

“If [users] have something to say on the subject, they could be even more of an expert than the actual journalist on that topic.”

Listly revamped its site with updates including “lazy loading”—a feature that allows long lists to upload quickly, and a partnership with WordPress. In additon, Listly now offers a premium service aimed at brands and publishers. As part of this service, users can create and share draft lists with a specific group of people before the list is published. The premium accounts are priced at $99 per year for individuals, with a $299 account for teams to be added soon.

Flattr is social micro donations site created in 2010 by Linus Olsson and Peter Sunde of Pirate Bay. Akin to an “Internet tip jar” Flattr members pay a minimum of two euros a month and link their social accounts. A user then clicks on Flattr links around the Internet to reward content. At the end of each month, Flattr tallies up the total amount of content you’ve “flattr’d” and divides your monthly allotment by that amount.

It has now become more user-friendly by partnering with Twitter, Instagram, Soundcloud and Flickr among others. In this way, any “like” button on these sites can be flattered. If the receiver doesn’t yet have a Flattr account, they are notified that they’ve been flattered and can register to “claim the money.”

In an article on Techdirt, Mike Masnick noted that with its small following, it might take awhile for Flattr to monetize.

“Part of the issue is that there are some usage hurdles,” wrote Masnick. “The service has a small but dedicated user base, but it seemed to stagnate over the years…It still requires getting people to sign up to pay — and that, of course, will always be a big hurdle.”