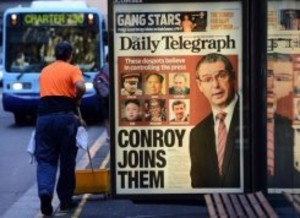 Conroy unveiled proposed media reforms including a public interest test for major mergers and stricter self-regulation requirements for print media. Both would increase media regulations that have Australian press up in arms.

The public interest test would be set in place to promote and protect diversity in media. The changes are a result of two investigations into Australian media after the UK hacking scandal.

News Limited Chief Executive Kim Williams stated “Government should not be introducing media legislation driven by a motivation to punish or restrict investment or worse, to play favourites. It should be reforming already out-dated regulations to encourage investment and from that innovation, growth, and jobs in Australian journalism.”

“This is the first government outside of wartime that is contemplating government-sanctioned journalism,” said Williams.

Tony Hale, CEO of The Newspaper Works, was in agreement with Williams, saying,

“We are frustrated and disappointed at the Government’s lack of consultation with publishers, and the speed at which the Minister is rushing these changes through the Parliament given the magnitude of the proposed reforms.”

In a statement to the press, Conroy said “the Government passionately believes in freedom of the press as the cornerstone of democracy.”

The reforms could be enacted before the national election in September, but the opposition party, which is leading in the polls, has pledged to withdraw the public interest test.