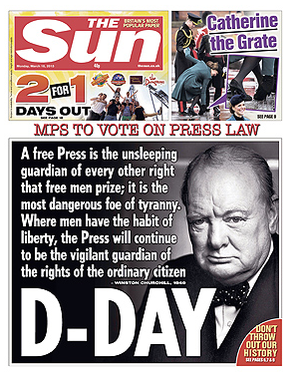 The agreement, which The Guardian lays out, will create a regulatory body to replace the Press Complaints Commission. The new group will be capable of directing apologies and corrections from news organizations and enforcing fines up to £1 million.

Critically, the regulator will be established through royal charter rather than law. However, a clause will be inserted to Enterprise and Regulatory Reform Bill that states that all royal charters cannot be amended without meeting the requirements laid out in the charters themselves. In this case, this charter will say that it cannot be modified without agreement from two-thirds of both houses of parliament.

While Prime Minister David Cameron maintains that “it’s not statutory underpinning,” Clegg and Miliband both address the clause as such. The clause makes no mention to Leveson or press regulation; rather, it encompasses all royal charters.

“What we wanted to avoid and have avoided is a press law,” Cameron said.

Only one individual from the newspaper industry will sit on the regulator’s appointment board, and he will not have the power to veto any appointment. To address newspapers’ concerns that “unreasonable” individuals, such as members of Hacked Off, may thus join the regulator, strict professional requirements will be mandated for an appointment.

By being able to “direct” apologies and corrections, the group will have more enforcement power than if they were merely able to “require” them.There is also a suggestion that the regulator may be able to order corrections and apologies printed in prominent positions such as the front page. Cameron previously said that this regulatory body will be unmatched by any in the Western world in terms of firmness.

A group comprised equally of editors, journalists and those outside the industry will write a code of conduct for the industry, and the new regulator will be responsible for enforcing it. Unless the regulator repeatedly fails at this task, it cannot be derecognized.

A publisher that does not join a PCC group will be required to pay high fines if it prints a piece that disrespects an individual’s rights.

The Sun, The Telegraph and Daily Mail have declared intentions to set up a regulatory body separate from the one proposed by the new agreement.

Dan Hodges of The Telegraph argued that Monday’s decision was somewhat irrelevant, as “the impact of Leveson is already being felt, and it’s already undermining legitimate journalism.” Regardless of the semantics, the fact that the conversation is occurring means that Britain no longer has a truly free press but a “broadly free press,” he writes, adding that investigations will suffer as a result.

The Daily Mail emphasized that Leveson’s proposal was an overreaction to the phone hacking scandal, as that was not a result of inadequate regulation but inadequate enforcement.

“How can phone-hacking by a coterie of renegades possibly justify a new Press law that would ride roughshod over liberties we have cherished for three centuries?” the editorial says.

Mark Edwards of The Peterborough Telegraph says that “there can be no greater self-inflicted attack on our prized democracy” than statutory underpinning on this decision, adding that “parliament seems determined to overturn centuries of freedom in a knee-jerk reaction” to the phone hacking scandal.

The Independent’s response was more tempered and says all should strive for optimism: There’s little to be done about the agreement now, so let’s wait and see how it shapes up, Stig Abell writes.

Though statute is not ideal, in this case it’s necessary to restore readers’ trust in newspapers, a separate editorial in The Independent says.

“We recognise the need for the restoration of trust,” the editorial says, “which must begin with a better means of regulation.”