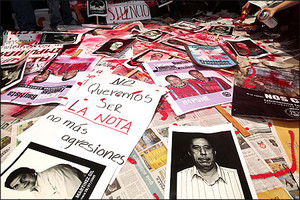 Article 19, an international NGO committed to protecting freedom of expression and information, reported that seven journalists were murdered in Mexico, along with two disappearances and eight violent attacks on the media. The report, titled “Double murder: press between violence and impunity” identifies all attacks suffered last year by journalists including threats, destruction of property, forced displacement, extortion, and kidnapping.

“It is the face of impunity which leaves journalists increasingly vulnerable,” says Diego Osorno, editor of Gatopardo in Mexico and member of Article 19.

Contributor writer to the report Dario Ramirez says, “”We must reverse the silence and ensure the free flow of information.” Following the release of the report, Mexico’s chapter of Article 19 released a hashtag “Impunity Kills” on their Twitter.

Five of the seven murders were committed in the state of Veracruz, which since 2011 has been the state hardest hit by the violence of drug cartels and military offensives.

According to the NGO, 31 journalists were forced to leave their place of residence during the past two years in the face of threats of organized crime. However, state officials were allegedly responsible for nearly 44 percent of attacks against freedom of expression in 2012. The perception that not only criminal organizations are involved in the violence is one of the major concerns of the NGO.

Mexico is one of the most dangerous countries for the press, with 80 journalists killed since 2000, according to the National Commission on Human Rights, an independent agency of the Mexican state. El Zócalo de Saltillo is the latest newspaper to stop reporting news about organized crime. The decision comes three days after members of a criminal organization posted signs in various towns in the state of Coahuila threatening the Zócalo news group.

The signs and banners threatened the journalists and staff with retribution, including death, if they continued reporting on the operations of the cartels. In an editorial, the newspaper wrote: “since there are no guarantees and no safety to practice journalism freely, the Editorial Council of Zócalo has decided, as of Monday, to stop publishing information related to organized crime.”

On Monday, several Mexican media organizations issued an urgent communiqué clearly outlining their demands despite a law that was passed in 2012 making killing a journalist a federal crime. It requires that the attorney general investigates all cases, but the law shows no signs of progress.

Article 19’s recommendation for the situation in Mexico outlines a clear and concise way to end violence on the press.

“The President must ensure that the special prosecutor, who is responsible for the investigation of crimes against journalists, is given greater autonomy and the resources necessary to enable them to do their job effectively. In turn, the special prosecutor must be fully accountable and transparent.”

Last month, the International Press Institute (IPI) and WAN-IFRA led a delegation to Mexico to examine government measures to ensure greater safety of journalists, along with strategies adopted by media and journalists to continue reporting from highly dangerous parts of the country.

The delegation visited Mexico from 10-13 February and met with a wide variety of interested actors including federal, state, and intergovernmental officials; journalists and publishers; foreign diplomats and representatives of civil society groups in Mexico City.

The delegation also looked into other issues challenging independent media reporting, such as media dependence on government advertising and concentration of ownership in the broadcasting sector.

WAN-IFRA has also published a detailed report on press violence in Mexico, which can be downloaded here.