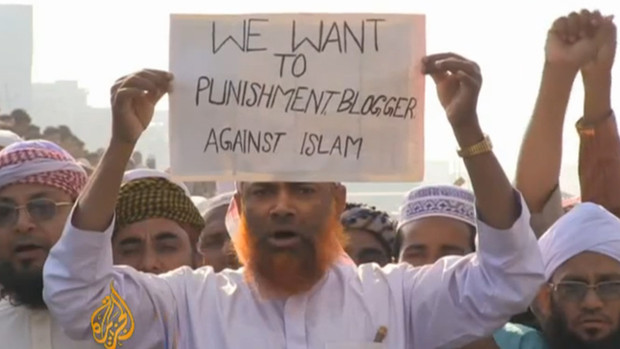 “God is great — hang the atheist bloggers,” the protesters chanted, according to Al Jazeera.

Among a list of 13 demands the group presented was legislation that backs capital punishment for blasphemous online writing, which under current law can result in up to 10 years in jail, Al Jazeera reported. While such a law is unlikely to pass, the situation for bloggers in Bangladesh is growing increasingly grim.

Tensions mounted in February when the Bloggers and Online Activists Network called for a sit-in at Dhaka’s Shahbag Square. The hope was to draw attention to unpunished criminals convicted of crimes during the country’s 1971 war for liberation against Pakistan. The group suggested the death penalty for individuals including Abdul Quader Mollah, secretary general of the Islamist party, who was convicted of 344 counts of war crimes, Slate reported.

Between 200,000 and half a million protesters gathered Saturday, deemed the “long march” as many traveled from remote villages to support the cause, according to Al Jazeera. Shahidul Islam, an imam at a mosque near Dhaka, told Al Jazeera he walked 20 km to join the protest.

“I’ve come here to fight for Islam,” he said. “We won’t allow any bloggers to blaspheme our religion and our beloved Prophet Mohammed.”

Two were killed Saturday: a leader of the Awami League and an anti-fundamentalist activist, according to The Times of India. The deaths add to a running tally of more than than 70 murdered in riots since the sit-in began, according to Al Jazeera.

Additionally, the Committee to Protect Journalists is investigating whether the February murder of anti-fundamentalist blogger Ahmed Rajib Haider was connected to his writing. According to Slate, Islamist leaders proclaimed that bloggers who incited the Shahbag Square sit-in would be publically slaughtered.

Bloggers Subrata Adhikari Shuvo, Mashiur Rahman Biplob and Rasel Parvez were arrested Monday because they had “hurt the religious feelings of the people,” a deputy commissioner of the Dhaka police said. Additionally, blogger Asif Mohiuddin, a self-proclaimed atheist who was attacked and stabbed in January, was detained Wednesday. Both his blog, recognized for social activism, and those of the other three were removed from the Internet.

“Just imagine: if the authorities can manage to shut down a voice by forcing the platforms to do so they’ll start believing that they can control the bloggers,” wrote Mohiuddin, as translated by Slate. “They will always find another reason to block another blogger … and imagine what will happen if a radical Islamist government comes to power?”

The government has also blocked access to about a dozen websites and blogs in the last couple weeks, according to a CPJ report. A government panel, including intelligence chiefs, was established to comb through social media for blasphemous content.

“Targeting bloggers who may not agree with the religious sensibilities of the majority is a cause for deep concern,” said Bob Dietz, CPJ’s Asian Program Coordinator. “Such a crackdown on the Internet creates a climate of fear and hinders free expression, which threatens democracy.”