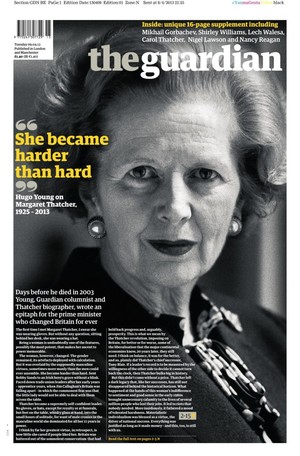 Should the UK media dutifully adopt a subdued form of respect following the death of a world leader who, having divided opinion so significantly during her premiership, should surely be expected to continue polarising views in the wake of her death? Ought journalists to be restricting their reactions to a purely reverential mourning, rather than using it as yet another excuse to argue over the Thatcher legacy? Or isn’t it inevitable, and indeed justifiable, that her death will spark strong opinions and reactions, prompting us to look back over her time in power and analyse it critically, even if this does mean highlighting the negative in some cases more than the positive?

Guardian columnist, Glenn Greenwald, has criticised what he labels a “misapplied death etiquette” – a “demand for respectful silence in the wake of a public figure’s death” that he feels “is not just misguided but dangerous.” He continues: “[the idea] that one should not speak ill of the dead is arguably appropriate when a private person dies, but it is wildly inappropriate for the death of a controversial public figure,” and calls for a need to perpetuate “public discourse about the person’s life and political acts” even if this involves expressing negative opinions and criticism. Greenwald does not believe that journalists have a particular duty of respect to Thatcher’s family, since her role as a focal point for political debate must be prioritized over any personal and familial concerns. Rather, he believes that their duty is to paint a truthful picture of Thatcher’s reign that illuminates both the good and the bad. Anything less, and journalism loses its power as a tool of democracy and free speech, since “demanding that no criticisms be voiced… is to enable false history and a propagandistic whitewashing of bad acts, distortions that become quickly ossified and then endure by virtue of no opposition.”

Indeed, the covers of many national newspapers do seem to have adhered to a so-called “death etiquette,” especially certain left-leaning publications from whom we might have expected greater criticism of Thatcher. The Guardian, for example, devoted a full-page photograph to the “Iron Lady” – the black-and-white portrait shows her in a flattering light, looking the reader directly in the eye with the hint of a dignified smile. Their front-page headline is a quotation from Hugo Young: “She became harder than hard,” a fairly neutral statement that doesn’t make a direct negative judgment of Thatcher, but does hint at the divisiveness of her character. Similarly, the 20p version of the Independent, i, chose “Thatcher: as divisive in death as she was in life,” which again refrains to explicitly criticise Thatcher, but equally refuses to heap hypocritical praise upon her. The Daily Mail predictably chose to glorify the former prime minister with the title: “The woman who saved Britain,” whilst The Times adopted a more restrained heading: simply “The first lady” – not explicitly opinionated (this is, after all, a fact), but deeply respectful, paying homage to her greatness without giving in to gushing appreciation. On the opposite end of the spectrum we have the Socialist Worker, with the capitalised headline: “REJOICE!” and a picture of a gravestone bearing the words: “Here lies Margaret Thatcher. Loved by the rich, hated by the poor.” Their editorial team has not made the slightest attempt to cooperate with Greenwald’s despised “death etiquette” – since they are a newspaper famed for their extreme left-wing opinions, surely it would be hypocritical and insincere to say anything less than this?

Although there is diversity of opinion in the newspapers, Oscar Quine points out in an article on The Independent that this comes nowhere close to the “passionate commentary on social media,” where users are “free to indulge their uglier impulses – spite, bad humour, moralising – with little policing.” Indeed, Thatcher’s death has been a prime opportunity for social networking to come into its own as a playground for the public exchange of unmediated, undiluted opinions. Creators of the website, “Is Thatcher Dead Yet?” have been receiving threats on Twitter from Thatcher supporters, whilst celebrity Geri Halliwell has been labelled “spineless” by The Spectator for deleting a message of condolence to Thatcher on Twitter (“Thinking of our 1st Lady of girl power, Margaret Thatcher, a grocer’s daughter who taught me anything is possible…x”) due to the backlash she received from anti-Thatcher Twitter users. One thing is for sure: social media is free from the leash of “death etiquette” causing some newspapers to tone down their reactions. As Willard Foxton commented on his Telegraph blog: “The great benefit of social media is that we are hauled out of our echo chamber where everyone agrees with us, and forced to confront the fact that there is another side to the debate.”

However, there comes a point at which freedom to criticise boils over into unnecessary slander and abuse. Yesterday, Tuesday 9 April, The Telegraph made the decision to shut down its reader comments system due to an overwhelming stream of malicious anti-Thatcher messages. Tony Gallagher, the editor of The Telegraph, tweeted: “We have closed comments on every #Thatcher story today – even our address to email tributes is filled with abuse.” Might this be considered a breach of freedom of speech in favour of a “misguided death etiquette”? Some Twitter users clearly think so – one tweeted the following message back to Gallagher: “you’re an ideologue & not interested in the truth or ‘freedom of speech’ at all.” Or is it merely an example of a newspaper exercising its power to prevent unnecessary slander that has no bearing on Thatcher’s politics, but merely disrespects her memory with abusive comments? The online debate continues…