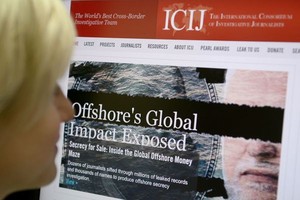 Beginning last Thursday, April 4, the International Consortium of Investigative Journalists has been releasing detailed reports exposing the workings of offshore tax havens, and hereby naming people who have hidden money from their respective governments and fellow citizens in overseas accounts. As a result, many of the world’s wealthiest and most influential individuals and organisations will have their names dragged through the mud as a consequence of their financial dishonesty.

According to the ICIJ’s central project webpage, those exposed by this data-driven investigation include “American doctors and dentists and middle-class Greek villagers as well as families and associates of long-time despots, Wall Street swindlers, Eastern European and Indonesian billionaires, Russian corporate executives, international arms dealers and a sham-director-fronted company that the European Union has labeled as a cog in Iran’s nuclear-development program.”

The scale of the investigation is unprecedented – 86 journalists from 46 countries analysed a bundle of data 160 times larger than the classified information released by Wikileaks in 2010. We are told by the ICIJ that the data drive included “four large databases plus half a million text, PDF, spreadsheet, image and web files” which enabled the journalists involved to access information on “more than 122,000 offshore companies or trusts, nearly 12,000 intermediaries (agents or “introducers”), and about 130,000 records on the people and agents who run, own, benefit from or hide behind offshore companies.”

Data journalism is transforming the way that journalists uncover and report on stories. Simon Rogers, author and editor of the highly successful Guardian Datablog (which launched four years ago) notes the way in which data journalism has rapidly become “our industry standard, our way of telling the big stories.” What’s more, data journalism itself is growing and evolving as journalists progressively learn more about filtering, analysing and visualising data, enabling them to turn excel tables of numeric information into ground-breaking stories and exposures similar to the recent Offshore Leaks scandal. In a video on the Guardian website about data journalism, Paul Lewis, Special Projects Editor at The Guardian explains how “it’s not the existence of the data, it’s not just obtaining it and putting it out there, it’s the processing that goes into it to work out what it tells you. You have to ask the right questions to get the right answers.” For this reason, the human element of data journalism is not to be underestimated. Deputy director of the ICIJ, Marina Walker Guevara, claims that, in the case of the Offshore Leaks project, “the story worked because there was a whole other level of traditional reporting that was going and checking public records, going and seeing — going places.”

It seems that nowadays, at a time when trust in journalism is low in some countries, data journalism has an edge in the industry due to the fact that it is underpinned by openness and concrete evidence, not on opinion, speculation, and nebulous sources of information – the key ingredients of an unreliable and inaccurate journalistic practice that could mislead and misinform the public. Rogers believes that, although “nobody trusts journalists anymore,” if they can successfully “provide the workings behind the story, [they] can be open and transparent,” and begin earning back the trust of readers who feel they have been betrayed by poorly-conducted journalism.