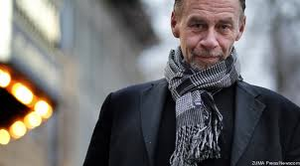 David Carr, The New York Times’ culture and media columnist, had some choice words about print media when he spoke with friend and MinnPost Editor Brian Lambert.

They spoke about the decline of alt-weeklies, most notably the Boston Phoenix, which closed after nearly 50 years in March. Carr, who began his career writing for the now-defunct weekly Twin Cities Reader, implied that alt-weeklies aren’t dead; they’re just experiencing hard times.

“The point is how do you deliver ‘usefulness.’ [He pulls out his rubber-encased, hard-traveled iPhone]. How do you end up as a button on this phone? That is where we’re going. I pay for a lot of things on this phone. I have Spotify. I have Pandora. I have an app that’ll make the phone spin around by itself.”

Carr had previously discussed the state of alt-weeklies with A.O. Scott. The two reminisced about the hard-hitting journalism of the past, which Carr described as “ferociously local.” Carr jokingly remarked that if you’re under 30, “you have no idea what we’re talking about.”

The annual State of the News Media survey also came up in conversation, with Lambert mentioning the fact that 60 percent of people surveyed said they’ve heard “little or nothing about the financial problems besetting news organizations.”

He continued, “I think the air has become ionized with information. It may not be as efficacious or as deep, but people know stuff, whether it’s the checkout line at the grocery story or a Facebook feed. It’s just that the harder stuff, about governance or state spending, where half our money goes, now has about half as many reporters covering it.”

Not exactly the most optimistic outlook of print media from a journalist, but an honest one.