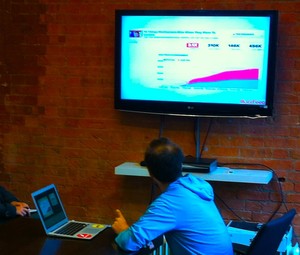 As you walk into the funky tech startup space in Clerkenwell that is BuzzFeed’s UK office, you quickly realise this is not your usual newsroom. After asking various other companies on the same floor, we found Luke Lewis with his team of three staff sitting quietly at the end of one table.

It’s refreshing and much has been written about BuzzFeed, not least the excellent article by Martin Belam after Luke Lewis spoke at a Hacks/Hackers event. CRO Andy Wiedlin was our most popular speaker at DME13 and Editorial Director Scott Lamb will talk at the World Newspaper Congress in Bangkok. No conference is complete without the BuzzFeed perspective and we’ve tried to pinpoint why they remain so relevant.

1) They are good at crafting news as entertainment. That was how one of our Brazilian publishers summarised the BuzzFeed concept. For serious news that might mean neat infographics. Recently they simply ran with “8 Astonishingly Mean Mail Online Comments On Angelina Jolie’s Mastectomy” which included a link to the source story on the NYTimes.

2) A UK presence means finding a spin to fit the British psyche – a notable example being the highly popular “19 Things Northerners Miss When They Move To London” by BuzzFeed’s London based journalist Sam Parker. Luke notes that content that “uplifts and delights” is still popular – but Brits look for a slightly more snide tone, laughing at rather than with – e.g. “The 21 Types Of Hipster You Encounter In London”

3) Social analytics are key. A clue to the environment BuzzFeed operates in can be found on the other side of the staircase in the middle of their office, where real time analytics company GoSquared make their home. But instead of buying in the same tools as rivals, they have built their own analytics engine from the ground up, and even their own recommendation engine. Perhaps a clue to the MailOnline’s success: they use the BuzzFeed analytics engine.

4) Web natives don’t read the papers. Luke’s own preferred news source on a regular basis is Twitter. This is fundamental to social sharing and explains the big effort to cooperate with Facebook News. A small amount of people will see the original BuzzFeed post on their website. The rest will see it via a shared link from a friend… and therefore…

5) Homepages are overrated. At least if the majority of your traffic comes through social sharing of specific links. As Luke says “We spend 10-20 min a day editing the homepage. It’s really not that important”

6) BuzzFeed is recruiting. Bucking a trend of shrinking newsrooms, they aim to grow to 10 staff by the end of this year. Luke has identified science as a quintessentially British topic and when we arrived had just posted an ad for a Science Editor.

Despite all this, we should note 2012 revenue for BuzzFeed was approx. $20m. They have some incredibly innovative approaches to sponsored content – even including a sponsored dashboard for users to tone down the number of cute cats. But this is not yet a major profit centre. The company is still growing and attracting seed funding, and it’s maybe sensible to see their operation as an inspiration but only one part of a sustainable business model.