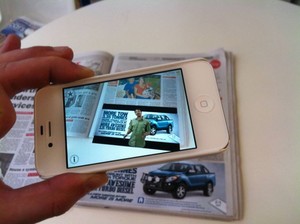 Put simply, augmented reality functions by allowing readers to scan parts of a newspaper – a photo, for example – using their smartphone, hereby unlocking a world of online multimedia content including videos, slide shows and infographics. On Tuesday (14 May), L’Express marked its 60 year anniversary by launching augmented reality technology, whilst national newspaper, Le Figaro, sports publication, L’Equipe and the free daily, 20 Minutes have all integrated variations of the same technology within the past few weeks.

Yesterday’s edition (15 May) of L’Express offered reader’s the first chance to test out its new free application, “L’Express-Connect”, which allowed them to scan parts of the paper with their smartphone to access digital content. For example, page 61 sent readers to an online file containing information on the Cahuzac affair, whilst page 119 redirected them to a trailer for The Great Gatsby to mark the inauguration of this year’s Cannes Film Festival. Thanks to this new technology, developed externally by French start-up Moodstocks, L’Express’ audience enjoyed an enriched and multi-layered interactive reading experience for the first time in the paper’s 60 year history.

Deputy Editorial Director and Head of Digital Media at L’Express Eric Mettout told Agence France Presse that, “until now, the newspaper referred readers to the website, but few readers actually did so since, when it comes to the Internet, things need to be as simple as possible. This tool [augmented reality] is ideal in providing a physical link between paper and Internet.”

“At the moment, readers need to download a separate application. But if the results are encouraging, we will integrate the technology into our main application,” explained Raphaël Labbé, director of innovation at the Express-Roularta group.

Le Figaro has joined also joined the augmented reality brigade, launching an external app called “Figaro Play”, which has already been downloaded “several tens of thousands of times,” according to Pascal Pouquet, the newspaper’s director of new media. Pouquet described augmented reality as a crucial part of the “transformation of the nature of the newspaper” as part of their plan to expand further into the world of video. Le Figaro and 20 Minutes have used the same digital pioneer, RedShift, to help implement this new technology

Sports daily, L’Equipe, has chosen to integrate augmented reality into its main, pre-existing app, “L’Equipe.fr”, which has already been downloaded by 4.7 million users, using it for the principal purpose of offering daily video round-ups of Ligue 1 football matches. Director of marketing, Xavier Audebert, talked to AFP about the vast potential of augmented reality in the field of advertising, too. “This advertising market is very important since it allows us to generate additional space, as opposed to limiting ourselves to a finite product in the form of a 22 page newspaper,” he said.

Augmented reality will also be the subject of a presentation at the 2013 World Editors Forum by Wong Chun Wai, executive director and group chief editor, The Star, Malaysia. The event will take place in Bangkok, 2-5 June.