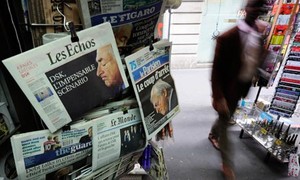 On 16 January this year, President François Hollande addressed the press with a “message of confidence” (see Le Figaro‘s article in French). Concerning the topic of aid to the press, Hollande promised the French media that the government would get down to work on the somewhat thorny issue, with the aim of reorienting their aid towards the digital press. Following three months of hard work, this promise has finally been delivered: yesterday, Thursday 2 May, the group responsible for brainstorming ideas for press aid delivered its recommendations to the Minister of Culture and Communications, Aurélie Filipetti. The report does not suggest a complete overhaul of the press aid system, but instead recommends two major changes: firstly, that the government harmonises the VAT system applied to printed press and online press, and secondly, that it unites the currently scattered financial aid into one single fund, which would regularly report back on its usage. The report argues that, in the interests of establishing neutrality of government support, it is time to “put an end to the discrimination from which the online press is currently suffering” (see Le Figaro‘s article in French).

The French online press currently pays 19.6 percent VAT on the sale of its content, but will soon profit from the heavily reduced tax of 2.1 percent currently enjoyed by the printed press. This change responds to one of the demands made by Spiil in a letter to Hollande on Monday 29 April. Yesterday’s report calls for this alignment of VAT levels to take place “without delay,” meaning that the government will be in a position to apply these changes anytime from June onwards. The measure, however, does not comply with European Union competition law. The French government will have to get the law approved by passing through Brussels first, as it previously did for the aligning of VAT for paper and digital books at a level of 7 percent in April 2012.

Contrary to the wishes of deputy, Michel Françaix – author of a report on press aid last autumn – there is no longer the possibility of reconsidering the uniform level of 2.1 percent VAT for printed press on a basis of whether the titles are part of the ‘Association de la presse d’Information Politique et Générale‘ (titles focussing on politics and current affairs), or whether they are “recreational” in nature. In the interests of solidarity and equality between stakeholders, yesterday’s report abandoned this idea.

The current system combines direct aid (for example, for aspects of the press such as circulation and pluralism) and indirect aid (tax, postal aid, aid to Presstalis – a major French media distribution corporation), totalling 1.2 billion euros per year. Yesterday’s report urges the government to unite the different types of aid in one main fund, hereby procuring one main instrument of aid for the press, rather than several scattered and uncoordinated funds. The report also calls for greater transparency. It recommends that a list of beneficiaries – including totals of their financial aid, direct or indirect, title by title – be made public in annual reports to ensure that the receiving and distributing of aid is not carried out under any secrecy.