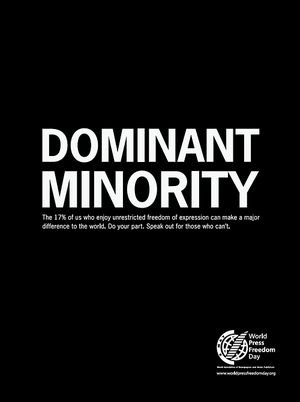 Free the press! It is a familiar refrain, one that grows louder year-on-year yet never loses relevancy. Why should a free press even be up for discussion? Are we failing to get the message across?

The simple answer is that the press equals power, and wherever power lies there are those who seek to control or influence it. By nature, a free press is untamed; capable of speaking unfiltered to public opinion, it has always been a vital conduit for free expression.

It has therefore been a constant target.

As we increasingly embrace our digital citizenship, the tyrants who oppose free speech are quickly learning how to act as digital oppressors. Targets are more numerous, attacks more complicated and diverse. Our awareness and vigilance must adjust with similar voracity.

Impunity for the killers of journalists extends also to those who murder bloggers. Censorship does not discriminate between editorial platforms. Prisons are built for those who “offend”, regardless of media.

It is impossible to prevent the oppressors of free speech from eroding our basic freedoms. And they do, as the press freedom indexes show, frequently and without heed for the consequences.

Our right to seek, receive or impart information through any media may be enshrined in international human rights law, yet the media must fight daily to remain a bulwark against intrusions on free speech. As a check on power, an independent press acts as society’s window through which the abuses, digressions, untruths and self-interests of the powerful are revealed for public scrutiny.

According to corrupt governments, violent criminals, and fundamentalists of every description, this window would be better permanently bricked-up.

Take Mexico, for example, where journalists face a violent, often deadly reception. The wider effects are devastating. “A climate of fear grows and it becomes better to remain silent than speak out about events that may pose a threat,” says journalist and writer, Anabel Hernández “This leads to self-censorship, which affects freedom of expression, which in turn affects the quality and depth of information that society receives. If society does not know the reality that surrounds it, who can make decisions?”

Wherever you live, whatever you do, pause for a moment and reflect on what kind of a society would be in front of you, were it not for the presence of an inquisitive media.

Who makes decisions on your behalf, and just how transparent is the process?

This, ultimately, is why we defend journalists and a free press worldwide.

Yet the Internet is undeniably raising the stakes. Checks and balances that provide the counterweight to power, of which traditional media were for so long custodians, are shifting rapidly beyond media-defined parameters.

The Internet invites censors into our homes, often unwittingly, and in the process has made freedom of expression a concern for anyone who signs on to social networks, communicates via email, and owns a smartphone or tablet device.

Or at least it should be of concern. Paradoxically, the great digital revolution that has introduced a truly globally connected age provides yet another mechanism for control, an opportunity for speech to be curtailed. Online news media, forewarned by the experiences of the written press, may be better prepared to combat this. But are we as individuals?

Online and off, new challenges or familiar threats are no less shocking. Each year heralds a roll call of journalist casualties, imprisoned media professionals or publications threatened, intimidated or financially strangled to the point of closure.

Above all, with a sense of solemn reflection, 3 May is an occasion to remember colleagues targeted for their work, especially those killed in the line of duty.

That ‘duty’ was not simply to bring us the news. Their work – by nature risky, sometimes dangerous, yet always outspoken – went beyond the headlines that became unintentional obituaries. Their work signifies a belief in a principle, exhorted by democracy and made tangible with every article, picture or broadcast.