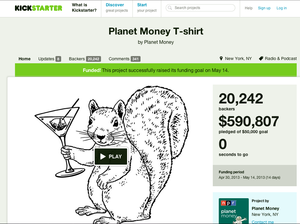 But these crowdfunded publications were all pointedly positioned outside of mainstream media. Several of the projects even marketed themselves this way, with De Correspondent branding itself “a daily antidote against the predictability of everyday news.”

This separation may be part of the secret sauce to crowdfunding success, media analyst Mathew Ingram speculated. Last year he predicted that large news organisations would likely fail with the tactic, as readers can be somewhat put off by media chains. The strategy, he wrote, is better suited for a “unique or even eccentric project from an individual journalist.”

But a recent Kickstarter campaign by National Public Radio and This American Life suggests otherwise. Their shared Planet Money team’s proposed investigation into the life cycle of a T-shirt raised $590,807 in its 14-day funding period, which ended May 14. Producer Alex Blumberg told paidContent he was surprised by the results, as he thought the team might just scrape their goal of $50,000.

The campaign’s success suggests crowdfunding’s promise for other mainstream media outlets. Large news organisations can use the tactic to finance in-depth investigations, which seem somewhat luxurious in the wake of budget cuts. According to Ingram, a typical newspaper investigative project costs about $200,000, which Planet Money’s campaign proves crowdsourcing can raise.

Securing just 1 percent of total annual philanthropic donations in the U.S. would translate to $2.4 billion of much-needed funding, according to the Donald W. Reynolds Journalism Institute’s Handbook for Community-Funded Reporting. While news outlets perhaps haven’t realized this full potential, Kickstarter alone has raised $32.69 million for publishing projects, and the site is just one of several options for crowdfunding campaigns. If mainstream media also gives it a try, crowdfunding could prove itself a “lifeline” for the industry.

The key, then, is not the news outlet itself but its project. For readers to open their wallets, they must truly believe in a mission, said Rob Wijnberg, editor of De Correspondent, which crowdfunded €1 million in eight days.

“I think a great part of success in general is that people who are behind it really mean what they say,” he said in an April interview with the Editor’s Weblog. “If you think it’s a formula, then most of the time I don’t think it will work.”

While there may be no one-size-fits-all recipe, several factors have been associated with crowdfunding success (check out this extensive list of tips by Laura Shin of Poynter). For instance, project leaders with higher Facebook friend counts are more likely to reach their fundraising goals, according to a July 2012 report by Ethan Mollick. Founders with 10 Facebook friends average a 9 percent success rate, 100 friends a 20 percent chance and 1,000 friends a 40 percent average, as the Editor’s Weblog previously reported. Transparency and trust are also critical, Ingram noted.

While Kickstarter remains the crowdfunding site leader, with $606.76 pledged per minute in 2012, other journalism-specific initiatives have emerged as alternatives: Vourno focuses on video journalism, Emphas.is on photojournalism and Spot.Us on investigative journalism. While there is an advantage of listing your campaign on a site whose audience is clearly interested in journalism, Kickstarter and Indiegogo have the benefit of exposure. In fact, Kickstarter had 86 million unique visitors in 2012. More than 570,600 people backed more than two projects, suggesting the importance of high exposure.

Ongoing journalism crowdfunding projects include a photo book showcasing the faces and stories of Chinese workers and ProPublica’s Investigating Internships project (several thousand dollars away from its goal, with less than two days remaining).