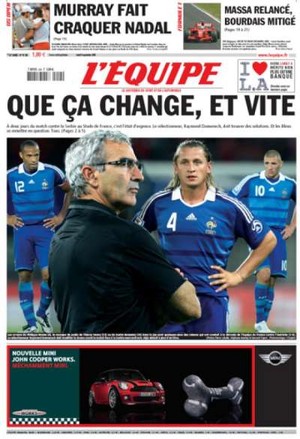 “For a long time L’Equipe has had a near monopoly on sports news,” Jouhaud explained to Le Figaro (see article in French). “But the context has undergone a radical change what with the rise of free online news offers from both specialists and generalists, and also from television channels. Our paper must therefore reposition itself to become more than just a newspaper of reports – but to take bolder angles on stories.”

The physical format of the newspaper, which up until now has changed according to each day’s news, will now be fixed. A more dramatic front page will be followed by a particular order of sections: football, general, ‘Extra’ (the magazine supplement with a brand new lay-out), and a new final page with a TV guide and interactions with online readers.

L’Equipe, which belongs to the Amaury group (also owner of Parisien-Aujourd’hui en France), is under considerable pressure to put a stop to the recent decline in its kiosk sales (-7.2 percent last year). Kiosks are essential to the success of L’Equipe, accounting for 75 percent of their total sales (which amounted to an average of 274,828 per month in 2012 according to the OJD (Association pour le contrôle de la diffusion des médias). “We hope to at least slow down this erosion,” said Jouhaud.

The relaunch of the daily newspaper occurs in conjunction with a surge in new digital paid content. Announced at the end of last year, a customisable app for tablets and smartphones, “MyL’Equipe” also launched on the same day, Tuesday 25 June, along with a photography app, “Zoom by L’Equipe” which offers slideshows of iconic images from L’Equipe’s archives since 1903, with a special Tour de France version of the app launched in conjunction with the competition’s 100th anniversary this year. Starting with golf, L’Equipe is also going to test out digital newspapers for specific sports available as paid apps through Apple’s digital kiosk in order to enrich the content of their existing print newspaper.

In an attempt to diversify its revenue (220 million euros in 2012), the L’Equipe team have also launched Ilosport.fr, a website focused on the practical side of 20 different sports (advice, health information, events diaries etc.), which should provide more advertising opportunities for the press group, who are also set to offer training courses for businesses run by top athletes and coaches on issues such as controlling stress and personal development.

As a result of their suffering sales and advertising revenue, L’Equipe has also been forced to implement a voluntary departure scheme whereby 60 employees, including 20 journalists, must leave the company by the end of 2014. It only remains to be seen whether the newspaper’s restructuring will succeed in keeping them afloat during such troubled times.