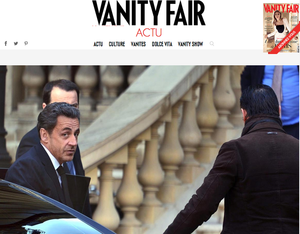 Considerable fanfare surrounded the publication of the magazine’s first edition, due in no small part to the €5 million advertising campaign that accompanied the launch and the appointment of Michel Denisot, a journalist known throughout France as the lead anchor for Canal+’s popular news show Le Grand Journal, as editor-in-chief.

The magazine’s editorial team will be hoping to match the success achieved by fellow European spin-off Vanity Fair Italia. While the German Vanity Fair closed its doors in 2009 after only two years following attempts to turn it into a celebrity-heavy, journalism-light weekly, editor-in-chief Luca Dini was able to defy the shrinking Italian advertising market to achieve a 5% growth in the number of advertising the publication carried in 2012 by emulating the high-quality reporting and glossy celebrity portraits that are characteristic of the U.S. Vanity Fair.

If its first edition is anything to go by, Vanity Fair France is set to follow in the footsteps of its more successful sister titles. Though American actress Scarlett Johansson graces its front cover, inside the magazine adopts a distinctly French perspective and carries long-form articles and in-depth interviews dedicated to Pascal Bonnefoy, the butler at the centre of the Bettencourt affair. Furthermore, the website vanitryfair.fr, launched in tandem with the magazine, carries an impressive scoop: the full transcript of former French President Nicolas Sarkozy‘s appearance before a judge over accusations that he took advantage of 90-year-old billionaire Lilliane Bettencourt‘s frail state of mind in order to secure funding for his 2007 election campaign.

At a time when advertising revenue is in a constant state of decline in the printed press, it may seem like the ultimate folly to introduce a magazine in a market that is already at saturation point. Le Figaro reports however that this move may not be as foolhardy as it seems. Quality titles aimed at women are one of the few areas of the magazine sector that continue to interest advertisers, and on its debut outing 93 of Vanity Fair France’s 268 pages were advertisements.