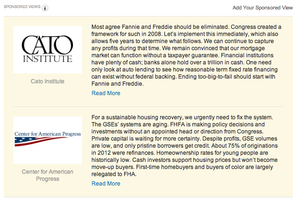 Targeted at advocacy organizations, trade groups and lobbying firms, Sponsored Views allows up to 600-characters in response to specific opinion pieces. The Post will charge upwards of $500 for the service, depending on the opinion piece’s popularity, when it was published and whether the purchase is part of a bundle, a Post representative told The Wall Street Journal. Three such responses are allowed per opinion piece on a first-come, first-served basis, but all are subject to guidelines.

Developed by the Post’s New Ventures team, the service is now available for opinion columns and editorials but will soon be rolled out to opinion blogs, according to the Post.

After the announcement yesterday, several sponsored views have gone live. CTIA – The Wireless Association, which has previously advertised in the Post, was invited to comment on an article on cybersecurity for free as part of the service’s launch. A CTIA representative told the Journal that they would consider the offer again if a relevant editorial is written.

As part of the service, users can register to get notifications when opinion pieces are written about certain topics, such as health care or gay rights. “Don’t miss your chance to respond at a moment’s notice,” an advertisement for the service reads.

“Sponsored Views’ premium placement enables participants to provide their perspectives with unparalleled contextual relevance, while still keeping the lines between news and sponsored messages crystal clear,” Steve Hills, president and general manager of the Post, said in a statement. “This unique advertising initiative is yet another example of our business team’s dedication to create innovative products for advertisers.”

The paid-for blurbs appear in shaded boxes at the very end of opinion pieces and are in no danger of fooling readers into thinking they’re written by Post staffers. Text stands beside the advertiser’s large logo beneath a “sponsored views” marker.

Unlike BuzzFeed’s successful advertorial strategy, in which paid-for articles tend to mesh with editorial content, the clear distinction of Sponsored Views will make the ads uneffective, argues All Things D’s Peter Kafka. Readers have been conditioned to glaze over anything that appears to be an ad. Moreover, few will even see the ads, as only a dedicated set make it to the end of online articles anyway. Kafka noted there’s been a push against “below the fold” ads for this very reason.

But paidContent’s Mathew Ingram recognized the strategy as “smart,” as it offers advertisers something elusive to them: a targeted audience. He noted that because brands now have many of the same tools of publishers, publications need to “try harder” and offer unique advertising opportunities. By allowing brands to speak directly to an issue they have a stake in, this program does just that.

And, sure, most people don’t read entire articles, as Kafka pointed out. But the ones who do are invested in the topic — and these are the very individuals advocacy groups want to access.

Ingram compared this initiative to The New York Times’ “Sparking Stories,” which allows advertisers to purchase a bundle of ads to be displayed on articles trending on Twitter.

The launch came the same day as the newspaper’s paywall was due to take effect, though most users will not notice a difference on the site until mid-July. In addition, this isn’t the Post’s first foray into sponsored content: BrandConnect, its advertorial program, was noted as one of the first of its kind after it launched in March. The service was innovative in that it allows publishers access to the Post’s publishing platform.

“None of that is going to change the newspaper’s overall financial picture much,” Ingram noted, “but it’s not stupid.”

Revenue from sponsored content is set to increase 18 percent this year, amounting to an additional $1.8 billion, according to figures from eMarketer cited by The Wall Street Journal.