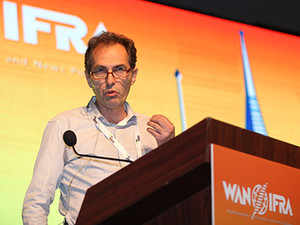 Editors and news executives discussed the importance of maintaining reporters on the ground and ensuring their safety in hostile environments such as Syria, Pakistan, Mexico and Sri Lanka, despite economic cutbacks and increasing risks for journalists, during the seventh session of the 20th World Editors Forum.

“I’m trying to deliver a simple message,” said Massonnet, acknowledging that “the media business may not be generating as much money as we would like these days.”

But “journalists have to stick to their positions, and their principles” especially when considering “the risk of manipulation is huge,” he said, referring to the multiplicity of online sources, and doctoring of images.

Social media is great, he said, but journalists have to “check and double check their sources, they have to talk to people, they have to be on the ground for that.”

Massonnet gave the example of the conflict in Syria, where independent journalism and original content is crucial to ensure unbiased, two-sided coverage.

To ensure the safety of its journalists, AFP provides training in first aid, courses for survival in hostile environments with the help of the military, and even preparedness for hostage situations.

Despite the importance of accurate coverage, we do not want to encourage stringers to put their lives at risk, said Massonnet. AFP doesn’t accept stories from stringers who don’t follow safety rules.

Such training and safety measures lack in some of the most hostile environments, said Zaffar Abbas, Editor of Dawn in Pakistan. In many television companies, the camera is insured – the cameraman is not.

Abbas painted a grim picture of one of the world’s most dangerous countries for reporters. More than 85 journalists have been killed between 2008 and 2013. Reporters have been abducted and tortured on a number of occasions. Sadly, perpetrators of violence against journalists enjoy near systematic impunity.

Abbas warned publishers to take better care of the security of their reporters, as he is one of very few journalists whose company provides security at his home, and other benefits. He has armed guards, and access to three different cars so that he can use different vehicles as well as varying his routes and time schedules.

“About 95% of the journalists out there cannot even think of getting these arrangements.”

“We are 162nd out of 179 countries in the latest Reporter Sans Frontières Index,” said Hattotuwa, lamenting the steady descent of Sri Lanka in RSF’s index.

“That decline hasn’t shown any sign of progress, but you would not know it if you were a media consumer in the country,” he said, because of the government’s grip on the media.

Cricket and government-related development projects are typically over-reported, while other matters such as police brutality, post-war human rights abuse, or the extent of Chinese investments, are under-reported, if not un-reported.

Javier Garza, Editorial Director of El Siglo de Torreon in Mexico, has had to come up with a wide variety of safety precautions to ensure the safety of his reporters. His publication covers the La Laguna Metro Area, caught in the middle of drug cartels’ turf war, where homicides have escalated from 89 in 2007 to 1,085 in 2012.

El Siglo has been the target of several attacks; most recently, in February 2013, five non-editorial workers were kidnapped. Federal police placed armed guards outside the paper, but they too were repeatedly attacked.

“If you’re a newspaper, you have to think differently how you’re going to protect your people, and tailor your risk assessment.”

Garza has come up with a number of safety guidelines for reporters, including:

Crime reporters don’t get bylines and a rotating team of reporters cover stories to avoid any one person being identified.

Despite the violence and risks for reporters, Garza insists on the importance of maintaining a presence and staying true to journalistic precepts. “We have always tried to avoid self-censorship,” said Garza. “If you do that, you’re abdicating your whole mission.”

Professional journalists also make mistakes, said Massonnet, “but the obligation for journalists to meet higher standards has never been so strong.”

“The real added value of journalists is what you can see with your own eyes.”

And when quality original content can be produced, thanks to the presence of reporters on the ground, “This is gold,” said Massonnet.