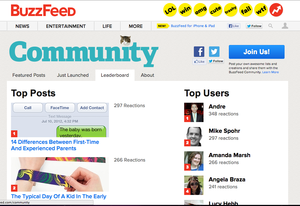 The 5-year-old “well-kept secret,” revamped in May, allows anyone to sign up and submit BuzzFeed-style articles for editor approval. Until users gets “Cat Power” by creating viral pieces, they’re limited to one submission per day. Community editors read every submission, Nieman Lab reported. That adds up: The platform now has about 500,000 registered members, producing about 100 pieces a day, according to Poynter.

As Nieman Lab pointed out, many of those users are journalism students or bloggers hoping for exposure and vying for jobs.

“On a basic level, BuzzFeed is a marketplace of ideas, and I want to compete in this arena,” said contributor Travis Greenwood, who added that his submissions have been picked up by National Geographic, TIME and the Huffington Post, among other established media outlets.

“Publishing something onto the homepage is like jumping onto the diamond with the Red Sox (I’m from Boston).”

The section is indeed a pipeline to employment, and several staffers, including Samir Mezrahi, Ellie Hall and Dorsey Shaw, were hired because of their Community posts, according to Poynter.

“It’s a path into journalism but also kind of into this new world of online journalism and writing for the Internet, where it’s difficult to define the skill set except you know it when you see it,” said BuzzFeed Editorial Director Jack Shepherd.

Editors work with top contributors to encourage more posts, and all users are given access to a BuzzFeed dashboard that provides information on how articles are performing socially for real-time feedback, according to Nieman Lab. This sort of feedback provides “valuable insight into what people relate to, what they find funny and what they want to talk about and share,” Community contributor and journalism student Austin Carroll said.

The idea of recruiting staffers based on their online engagement isn’t new. Gawker Media hires editors from their comments, paidContent’s Mathew Ingram reported in May. The Atlantic and Daily Kos have similar procedures.

“Our philosophy has always been to demolish the walls that separate the conventional wisdom from the truth, the reader from the writer, and the powerful from the curious,” Matt Hardigree, editor-in-chief of Gawker’s Jalopnik, wrote in an announcement of the site’s revamped commenting and contributing system, Kinja.

“… When we look for the next generation of writers for our site, and other sites, we’ll be looking at who does well in Kinja.”

BuzzFeed demarcates Community contributions similar to the way they do sponsored content: The byline notes their affiliation with the platform. This subtle distinction is one BuzzFeed has given much thought to, Shepherd said.

“We want community members to have this great experience and not feel like they’re ghettoized,” he told Poynter, “but we also want to make it as clear as possible this is not a paid staffer.”

The section generated buzz last week after the site deleted then reposted a submission by Joe Veix titled “The Top 10 DUMBEST BuzzFeed Lists You’re EMBARRASSED To Say You CLICKED.” Controversy over the removal prompted BuzzFeed to refine its “no haters” submissions guideline to allow users to poke fun at the site.

Also last week, a Community contributor posted a CNN comic without permission. The artist, Matt Bors, responded by billing BuzzFeed. The comic was promptly removed, and site does not plan to pay Bors, Poynter reported.