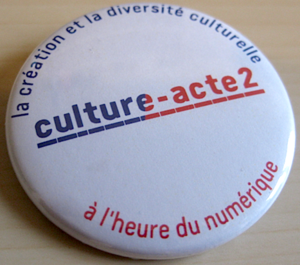 Compiled by Pierre Lescure, former head of television channel Canal Plus, the 500-page document contains 80 proposals in total, one of which is the recommendation that any device capable of connecting to the internet, including e-readers and games consoles, be eligible for what the report describes as a “moderate” tax of 1 percent. At a rate of 1 percent it is thought that the fiscal measure would generate €86 million, to be collected from manufacturers, meaning that it would have no direct impact on consumers. France’s culture minister Aurélie Filipetti has already suggested that the tax could find its way into next year’s budget. The minister added: “Companies that make these tablets must, in a minor way, be made to contribute part of the revenue from their sales to help creators,” reports the Financial Times.

Lescure was charged by French president François Hollande to compose the series of suggestions for the evolution of France’s cultural policy and the protection of French-language products in the digital age over the course of nine months, and presented his conclusions at the Elysée palace in May.

Four of the main representative bodies of the French print media, the Union of the National Daily Press, the Union of Magazine Publishers, the Union of the Daily Regional Press and the Association of the Free News Press issued a statement endorsing the levy on connected devices, which would be used to finance the digital transition currently occupying the majority of France’s cultural industries. “The press supports the Lescure Report’s proposition in favour of a redistribution of value between the cultural industries and the creators of technological platforms” went the press release, before going on to assert: “it is undeniable that content producers contribute to the perceived value of technological equipment.”

The development of strategies to protect and monetise digital content has been a central concern for French publishers during the past year. In February Google came to an agreement with France’s news and magazine publishers to put an end to a dispute over copyright laws and the Internet giant’s web indexing activity. Though the technology giant resisted calls from the French press to pay for linking to content, Google did agree to create a €60 million Digital Publishing Innovation Fund “to help support transformative digital publishing initiatives for French readers.”

As in news markets throughout Europe and the US, the printed press in France has seen its fortunes waver as it struggles to adapt to the challenges and opportunities presented by the advent of the Internet and digital technology. Currently, France’s policy of “cultural exception” means that the country’s creative sector, including journalism, benefits from a greater amount of protection than other “goods” and industries. Financing this conservation project are a series of taxes, notably on recording / copying platforms such as CDs and data sticks. Lescure however has said that this system, which is understood to have generated €180 million in 2012, could soon become an anachronism in the age of the cloud and streaming: “we have passed from the era of possession to the age of access.” Combining a tax on connected devices would therefore serve to update the fiscal structure that supports “l’exception culturelle” which would in turn generate more revenue to be invested in digital strategies developed by newspaper and magazine publishers.

The report has however come under criticism from those who believe that any levy on smartphones and tablets is an ill-advised attempt to compel new media players to support traditional industry figures. The New York Times revealed that intellectual property experts had expressed doubts as to how such a law could be drafted so as to be acceptable to the European Court of Justice and to device manufacturers, who might contest Lescure’s pronouncement that “actors that don’t directly exploit content, but which profit from its circulation [ought to] contribute to its creation.”