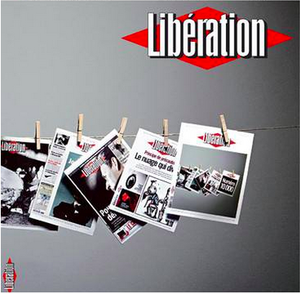 It would be hard to think of a more fitting way to commemorate the occasion. Founded in 1973 by Jean-Paul Sartre and Serge July in response to the events of May 1968, Libération‘s frequently captivating – and often controversial – front pages have become something of a trademark. As the paper’s director Nicolas Demorand and its editorial director Fabrice Rousselot note in an article announcing the 10,000th copy, “if one had to describe the adventure in a single word […] one could say that Libération is, above all, its front pages.”

From its coverage of the François Mitterand’s election victory to the fall of the Berlin Wall and the death of Michael Jackson, the paper’s successive editorial teams have maintained an emphasis on striking, apt photographs accompanied by pithy, sometimes monosyllabic, headlines.

The paper’s efforts do not however, always receive positive feedback. Only last year the newspaper affectionately known as Libé courted controversy by publishing a front page depicting France’s richest man Bernard Arnault clutching a suitcase, accompanied by the words ‘Casse-toi riche con’ (which loosely translates as ‘get lost, rich idiot’). Although many in France deemed the headline to be unworthy of such a prestigious news title, the paper remained defiant, mocking Arnault, who at the time was seeking to acquire Belgian citizenship, with a front page based on a text message apparently sent by former French president Nicolas Sarkozy to his estranged second wife.

More recently still, Libération has found itself caught up in a storm caused by a front page it published in relation to a rumoured Mediapart investigation into the finances of French Foreign Minister Laurent Fabius. The front page, dominated by the words ‘Cahuzac affair: The Nightmare Continues’, and the following article suggested that François Hollande’s government, already rocked by the revelation that its budget minister had a secret Swiss bank account, was composed of other figures who had sought to hide their personal wealth in order to avoid taxes. The paper was forced to defend itself by stating that it “in no way claims that Laurent Fabius possesses an account in Switzerland. We have no proof of that and […] this was never the purposed of the article. Our aim was to tell of atmosphere, the state of anxiety and of panic that reigned at the highest levels of government…” News website Rue89, founded by former Libération journalists, reported that in the wake of this latest faux pas employees at the legendary title are becoming increasingly disgruntled with Demorand’s leadership.

Demorand and Rousselot are nonetheless optimistic about Libération‘s future. The two have said that Tuesday’s commemoration edition the prelude to a new phase at the publication. From September, the paper’s website will be “remodelled and rethought”, readers will be presented with “innovative” weekend editions of the paper and a book will also be launched in honour of Libé‘s 40th year.