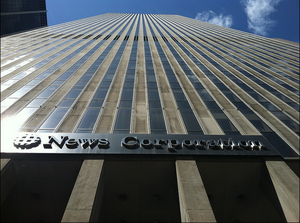 With the devolution of News Corp’s publishing arm from the rather more lucrative 21st Century Fox Entertainment finally complete, Thomson has been outlining plans to target smartphone integration and digital innovation in the hope of convincing investors that there is more to the company’s 130 news titles than print. Speaking to the Financial Times, Thomson revealed that the print newspapers owned by News Corp are to be reimagined as “platforms,” for launching smartphone applications and other digital products that will encourage audience engagement across multiple devices. The former editor of The Wall Street Journal went on to explain the need for News Corp to mount a challenge to digital news sources and entertainment sites, hinting that the New York Post would soon be aiming to take on Buzzfeed’s “erzatz tabloid journalism” on a national level.

In Britain, News International has become News UK following a rebranding exercise aimed at limiting the damage caused by last year’s phone hacking scandal, and flagship title The Sun is to be at the forefront of the quest to conquer the “second screen.” A recently agreed deal with the British Premier League will allow The Sun to broadcast almost-live match highlights online and through smartphones. Meanwhile all of News UKs titles will prepare to target a wider audience by tailoring their sports reporting to readers in Asia and South America. This combination of globalisation and a shift to digital consumption are key to Thomson’s strategy for the publishing company’s growth. Addressing investors in Sydney this week, Thomson insisted that the company as a whole would have a “permanent start-up sensibility” and it seems likely that a considerable portion of the $2.6 billion dollars News Corp received as part of its divorce from 21 Century Fox will be funnelled into digital innovation opportunities.

Thomson’s statement that the media is “still at the early stage of a second great migration, from print to web from web to mobile” appears to be supported by figures collected by Pew Research Centre’s annual State of the News Media report. In 2012, 23 percent of adults in the US accessed news sources on at least two digital devices, while this year’s survey shows that 45 percent of US adults own a smartphone (up from 35 percent in May 2011) and at least 31 percent own a tablet computer. Of those smartphone owners, 62 percent use the device to read the news every week and 32 percent get mobile news every day.

News publishers seeking to engage and retain readers are consequently adopting an approach that favours mobile interaction. Interviewed by Editor and Publisher as part of a wider report on the importance of smartphones as a key publishing platform, Matt De Ganon, vice president of mobile product and operations at Gannett, discussed the importance of adapting news brands to changing consumer demands. “Replace current rituals,” he advised, “but don’t spend money on new rituals. Be available where the ritual is.” For its 30th birthday, Gannett’s USA Today underwent a significant makeover and reinvented itself as a digital-friendly publication, in order to adapt to emerging “news-consumption rituals.”

News Corp appears to agree with the need for change in its business model, yet while De Ganon also says “If you think web first, you end up adding costs,” the publishing company hopes to further focus on and monetise its online offerings, and is to pursue attempts to encourage readers to pay for digital subscriptions in order to access web content. The Sun will begin charging its readers £2 a week from August 2013, and though this may lead to some abandoning thesun.co.uk, the paper’s executives are unperturbed by any potential fall in visitor numbers. At The Times CEO summit, News UK’s Chief Executive Mike Darcey revealed that he was willing to sacrifice reader numbers in the name of profit. Darcey went on to say that while free websites receive more traffic than those with a paywall in place, they “don’t generate any meaningful revenue.”

Darcey and Thomson’s comments reflect an awareness of the need for News Corp’s ailing publishing assets to become profitable, if the company is to survive without the financial support of Rupert Murdoch’s significantly more lucrative entertainment investments, now grouped together as 21st Century Fox.

Monday, 1 July 2013 was the first time News Corp and 21st Century Fox began publically trading on the New York and Sydney stock exchanges as two separate businesses, after the division of News Corporation into distinct publishing and entertainment concerns was finalised in June. News Corp, whose assets include the Wall Street Journal, the New York Post and the publisher Harper Collins, received cautious response from the markets on its first day of trading. CNBC reported that shares fell by 2 percent on Monday to $14.95. In contrast, News Corporation’s entertainment spin off saw the value of its shares rise by 2.1 percent to $29.37.