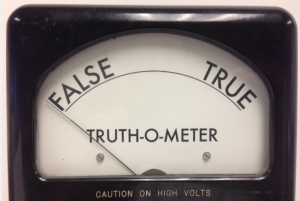 The ‘retreat from authority’

Clune’s question was inspired by an article written by journalist and media analyst Tim Dunlop, which suggested that fact-checking sites were a symptom rather than a cure for fundamental problems in journalism. Dunlop proposes that in a news environment in which journalists are increasingly under pressure to provide round-the-clock updates and reports, fact-checking has fallen by the wayside. Yet he also argues that the need for dedicated fact verification sites has an even more profound explanation. The statement of facts requires a judgement to be made, in order to decide “that one side is telling the truth — dealing in facts — and the other isn’t,” he writes on The King’s Tribune.  In a media landscape where news organisations shy away from accusations of bias or partisan reporting, fact-checking sites are not just a tool for readers to verify accounts written by time-pressed journalists: they are also a means for news outlets themselves to continue in their practice of “he said/ she said” reporting. “By outsourcing the fact-checking process — the actual judgement — to independent sites, media organisations can now safely report those sites’ findings […] not as something they themselves have made a judgement about, but as something someone else said,” Dunlop writes.

At first glance, the profile written by Anton Harber on the Africa Check site he founded with Agence France-Presse would seem to support Dunlop’s analysis. Not only does Africa Check seek to hold the political class to account, it also aims to highlight and debunk the erroneous reports filed by news agencies themselves. “I imagine a situation in which every public figure and journalist feels nervous about what they say or write because Africa Check might just catch them out,” Harber says.

The necessity for a “watchdog” that examines and monitors not only the world of politics but journalism too would seem to suggest that the answer to Clune’s question is “yes”: fact-checking sites are a sign that traditional journalism is failing in its duty to report accurately and truthfully. However, Harber appears to present this fact-checking service as an essentially journalistic enterprise. Not only was it created in collaboration with the AFP Trust, Africa Check also works with journalism school students and is edited by the investigative reporter Julian Rademeyer. Meanwhile in Australia, PolitiFact works in association with Fairfax media and Channel 7, and Election Fact Check is the product of news site The Conversation. Viewed this way, sites such as Africa Check could be understood as examples of journalists holding other journalists to account. This in turn demonstrates that rather than journalists as a whole failing in their duties, certain elements of the media are aware of the obligation to truth and the point of putting their own industry under the microscope.

Bill Adair, founder of Politifact, recognizes the validity of much of Dunlop’s assessment, though differs somewhat in his appreciation of the significance of fact-checking sites. Speaking to the Editor’s Weblog, Adair said he was inspired to ask his editors at the Tampa Bay Times (then the St. Petersburg Times) to set up a fact-check service after recognizing shortcomings in contemporary political reporting. “[Tim Dunlop] has a point in that the reason I created, or convinced my editors to create, PolitiFact was that I felt personally that I had not done enough fact checking as a journalist. I was at the St. Petersburg Times during the Bush administration years and I realised that the news media, myself included, hadn’t done enough to check facts.”

Adair, who is now Knight Professor of the Practice of Journalism and Public Policy at Duke University, went on to say that fact-checking should become one of the core things of what journalists should do, and that the situation is showing signs of improving. The New York Times and Associated Press in particular were cited by him as organisations where a journalist will indicate whether or not a quoted statement is true.

That said, Adair also added that there are reasons why fact-checking should be kept separate from mainstream journalism: “If you’re covering parliament or congress, and you’re responsible for telling people what is going on and getting scoops, it can often be difficult if you’ve given a leader a ‘pants on fire’ [the rating PolitiFact’s ‘truthometer’ gives to unfounded and ridiculous claims] to get a statement. Fact checkers are not beholden to anybody. If you give the White House a ‘pants on fire’ you won’t get an interview, but fact checkers don’t care about access. It gives them a certain independence.”

Asked why there is currently such an abundance of fact-checking sites, the reporter-turned academic suggested that specific fact-verification services are a necessary evolution in journalism. “We’re living in a time when there is so much information that does not come through the news filter. Twenty-thirty years ago people got their information from newspapers and the evening news, so these outlets could be an effective filter. Now, so much of this information comes directly from the government and from campaigns that do not have to go through the media, and there’s no way of knowing what’s true and what’s not from this direct information. Fact-checking is not only journalism, it is important journalism.”