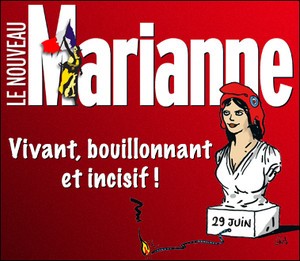 “The news magazine is dead!” believes Kahn (quoted in French by Le Monde), who quit his post as head of Marianne in 2007 and retired from journalism in 2011 before making this unexpected comeback as the pioneer of a brand new style of news magazine. Two years ago, deep in the thick of a crisis within the printed press, Kahn – also the founder of the failed weekly publication L’Evenement du jeudi – sat down and wrote a 40-page report on how a news weekly might survive during the age of the Internet. Having distributed it among leaders of the press industry, Kahn then decided to apply his ideas of improvement and development to his own former publication, Marianne, in a last-ditch attempt to rescue the weekly from economic doom.

Marianne’s kiosk sales saw a recent plummet, with a 9.6 percent decrease in 2012 alone, suggesting an urgent need for a strategy and/or image overhaul. One of the major problems Kahn identified was the magazine’s cover – a key representation of the publication’s brand that was simply no longer working. “Headlines on estate agents, free masons, or François Hollande are outdated. They are boring and repetitive and fail to reflect the richness of the magazine,” he argued. Instead, Kahn believes that news weeklies need “a cover with five different headlines, to ensure that every week readers are faced with five good reasons as to why they should buy the publication.”

Kahn has not returned to resume leadership of the magazine, but rather is working to guide its growth and development as part of his consultancy company, “République Communication.” CEO of Marianne, Maurice Szafran explained to Libération that Kahn’s consultancy firm will be working with Le Nouveau Marianne until September to help execute the intensive reworking of the magazine’s editorial content. Kahn did not arrive with a definitive project set in stone, but has been working in collaboration with Szafran’s team to improve their editorial offering.

The revamped front cover now has five attention-grabbing headlines set against a white background (considered less aggressive than the magazine’s traditional red and black). Faced with the press’s economic crisis, “we decided to transform our content quite radically,” explained Szafran to Libération. “We’re going back to the magazine’s roots,” he continued, “we want to hold a conversation that is extremely citizen-based and political, we want to be in a position to rekindle collective hope and ambition.” Other notable changes according to Kahn include the return of a “fait divers” section (news in brief), the addition of four “alternative” pages with “concrete propositions which contribute to change within the country,” and a brand new column called “On n’est pas d’accord avec vous” (“We don’t agree with you”), intended specifically for the airing of discordant opinions.

One rather glaring element that has not been considered within the program of change is the Internet – Szafran told Libération that, for the moment, his team has been channeling its efforts exclusively into the print magazine, but that it will begin focusing on the digital side of matters in September. Kahn expressed hopes of “interconnecting web and print” and transforming the site into a “laboratory” and a “receptacle for debate.”

Readers can currently subscribe to Le Nouveau Marianne’s web, iPhone and iPad reader starting at 6 euros a month, or alternatively a digital copy of the magazine is available for 2.69 euros through the Relay site (for PC and Mac) or kiosque.fr (for PC, Mac and Linux).