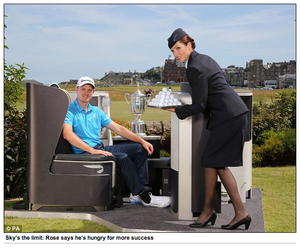 While the interview content with the U.S. Open champion was standard fare, fine print below the stories sounded alarm bells. All outlets included statements that amounted to “soft ads for British Airways,” as the Guardian’s media commentator Roy Greenslade pointed out in the Guardian.

The Times, Daily Mail, The Sun, Daily Express and Daily Mirror all printed the same words at the bottom of their articles: “British Airways is proud to support US Open Champion, Justin Rose, helping him to arrive feeling refreshed and ready for the competition ahead.” Greenslade reports that the same disclosure was printed in The Independent and i, though it was not included in the online version of the article. The Daily Star also included an interview with Rose on Monday, featuring many strikingly similar anecdotes and quotes, without the statement.

The Guardian used the same disclosure with the exception of the phrase “feeling refreshed,” and the Telegraph ended the statement after Rose’s name, as Greenslade noted.

More troubling than that copy were the photos several of the news outlets ran: a British Airways flight attendant serving Rose, in a first-class-style seat, a tray of golf balls. With dozens of photos from the U.S. Open, why would newspapers use these photos unless they felt they “owed” it to British Airways?

Details of the transaction are unclear, but it appears to be a sort of quid pro quo arrangement: Rose may have only agreed to the interviews if the newspapers promised to give British Airways some publicity. The Times notes that Rose was “fulfilling one of his responsibilities as a ‘brand ambassador’ for British Airways,” a three-year deal inked in April. The agreement specifies that Rose will “support the airline’s global marketing activity, including personal appearances, media and PR,” according to Rose’s website.

Rose provided each reporter the same anecdotes and, on more than a few occasions, the same sentences.

For instance, Rose told the Mirror: “Not until recently did I realise what effect that start to my pro career did have from a deep-rooted confidence point of view. I really feel I’ve been capable of winning a major for the last two years and that’s why I feel relatively lucky I’ve got the monkey off my back pretty quickly.” He recited the exact same passage to the Guardian, with the only difference being the substitution of “to have got” for “I’ve got” in the last sentence. The striking similarity suggests a either a marathon day of interviews for Rose, or a press conference-style session, seemingly orchestrated as a PR boost for British Airways.

Though The Times called it an “exclusive,” all of the U.K.’s top 12 national dailies except the Financial Times and the Daily Record published the story. Why did so many news outlets take this bait? Yes, speaking to Rose was warranted due to his U.S. Open success, but was the interview worth it? Greenslade wrote that in this case, the story may have come at “too high a price.”

“I would very much doubt that it affected what was written, but it surely tends to undermine the credibility of the pieces in the eyes of the public,” Greenslade wrote.

Of course, it’s not unusual for PR firms to arrange interviews, and no disclosure is needed in these cases. None of the stories were designated as “sponsored content,” but the added photos and copy suggests that marketers are having too much influence on editorial content.

By agreeing to these sorts of deals, news outlets are chipping away at the wall between editorial and advertising. PR giant Edelman noted in a recent report that news organisations must prevent contact between “those who produce and place sponsored content and those who work directly with journalists,” Forbes reported. This episode seems to be crossing that line.