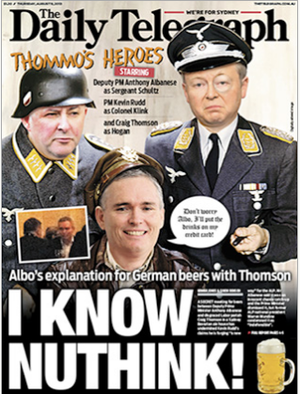 On Monday 5 August, the Daily Telegraph, Australia’s biggest selling weekly, ran a front page that left readers in no doubt as to the editorial line that would be adopted in the run up to September’s election. Emblazoned across a photo of current Labor prime minister Kevin Rudd were the words “Finally, you now have the chance to kick this mob out.”

The unequivocal stance assumed by the News Ltd paper has been described as “pretty extraordinary” by deputy PM Anthony Albanese, who also said he has been in touch with News Ltd employees embarrassed by orders to report negatively on Labor.

It’s not just the sentiment of the front page that is raising eyebrows, but the timing of its publication: last Monday was the first official day of election campaigning. Rather than waiting for the end to be in sight and consigning such forthright sentiments to the paper’s editorial section the Daily Telegraph has gone into the campaign period with all guns blazing. There was some expectation that News Corp’s Australian titles would be paying special attention to the 7 September elections after editor-in-chief of the New York Post Col Allen was deployed to Australia to oversee operations on a 3-month basis. The Daily Telegraph also ran a front page last week depicting Rudd as Colonel Klink from the American sitcom “Hogan’s Heroes.”

Though the Telegraph backed Rudd during the 2007 elections, it has been clear for some time that the man who recently replaced Julia Gillard as head of the Labor party would not be able to rely on the support of the Murdoch owned-media. Rudd himself has implied that Murdoch’s opposition to a proposed high-speed broadband service is at the root of such vehement opposition to his premiership. The proposed A$ 34 billion (approximately 23.5 billion euros) National Broadband Network would service every home and business in Australia and could present a challenge to the Murdoch-owned Foxtel.

Murdoch is of course no stranger to accusations of engaging in political debates via his news publications. The now legendary “It’s The Sun wot won it” headline, claiming that the 1992 British election result was determined by The Sun’s coverage, was cited during the Leveson Inquiry as proof of the overly close relationship between press and politics in the UK. The inquiry into the ethics and practices of the British press, sparked by the News Corp phone-hacking scandal, ruled that there were no explicit deals concerning positive coverage between political parties and News Corp titles. Nonetheless, Lord Leveson did rule that “politicians’ interests… would find themselves highly aligned with Mr Murdoch’s” due to the influence exerted by the latter, according to The [UK] Telegraph.

Yet while fears may abound in the Labor party that Rupert Murdoch’s dominance in the Australian media market (70 percent of which is owned by News Corp) could hamper their re-election bid, some have suggested that this is far from likely.

Writing for The Guardian, Bronwen Clune insists that while Murdoch packs a “fair political punch” thanks to his ownership of two-thirds of Australia’s press, “but as to its impact on an election result, that’s another matter entirely.” The vice-president of the Public Interest Journalism Foundation goes on to write that “audiences have always held the power, and are not easily swayed by the delusional egotism of media owners.” A sentiment echoed by Peter Cheng in a post for ABC’s media analysis blog “The Drum.” A lecturer in Politics at the University of Sydney, Cheng also maintains that “the fear that this blatant propaganda will automatically swing the election is considerably overdrawn. Research into the impact of political communication helps us put the effect of this reporting into perspective, because it shows that media audiences are not as susceptible to this type of campaign as they are commonly assumed to be.”

Overall, Cheng argues that strong editorial stances can set political agendas and dictate which issues come to the fore. However, he continues, they cannot influence people’s political opinions in the short term, only ignite feelings that already existed in the minds of news consumers.

Interestingly enough, a survey by the University of Sunshine Coast suggests that news media bosses could be more in touch with the opinions of the Australian public than the journalists they employ. The Conversation reports that of the 83 senior editors participating in the poll (640 journalists overall took part) the Coalition party was the “party of choice” for 43.2 percent, while 34.1 percent backed Labor. These figures echoed the views of the Australian electorate back in May. The survey also reveals that while News Ltd titles are widely seen to be right-of-centre, 46.5 percent of the 86 journalists employed by the company would back Labor during the elections.

The flagrantly negative news coverage so early on the campaign trail is far from helpful to Rudd’s re-election hopes, but is unlikely to be the deciding factor in 2013’s race to The Lodge.