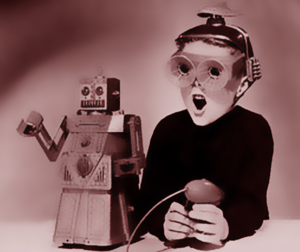 In a video interview on washingtonpost.com, the paper’s High School-Sports Editor, Matt McFarland, revealed that last year the Post considered using automated journalism technology. As things stand, The Washington Post employs four full-time reporters to cover local high school sports and for the time being this will continue to be the case. However “down the line [computer generated content] might be something that happens.” McFarland and his team are responsible for 200 schools, and would need “about 300” reporters if they wanted to cover every game. Quizzed on whether he had any concerns about putting human reporters out of a job, McFarland replied: “if a computer can do my job better than me, I need to go somewhere else.”

Many maintain that a computer will never be able to challenge the quality of writing produced by human journalists, but Narrative Science is betting otherwise. Citing an unwillingness to put reporters out of work as the reason why it has yet to produce a Major League Baseball story, Chief Technology Officer Kristian Hammond nonetheless maintains that Narrative Science’s systems are more than up to the task of producing an article out of any set of data.

As the Editor’s Weblog has previously reported, Narrative Science is the automated writing service that has succeeded in crafting fluent prose out of confused piles of data. Counting Forbes as one of its high-profile clients (NS produces online articles on corporate earning statements for the business journal), two months ago the company received an investment of an undisclosed sum from In-Q-Tel. This venture firm invests on behalf of the CIA and has already had a hand in funding projects that are now seen as commonplace, such as the touch-screen technology in iPads, reports Venture Beat.

It’s the kind of investment and recognition of the insight that automated journalism can provide that could open more doors to Narrative Science’s services, and also see the company expand even further. So far the use of algorithms to produce news articles is almost exclusively confined to business and sports reporting due to the amount of data produced in these two fields. It seems increasingly likely however that the company will begin to look to grow beyond this niche, and individualised reports, tailored to the interests of specific readers, are set to be the next step, according to The Washington Post.

Not every newspaper will be tempted by the promise of Narrative Science and its ilk. When the Orange County Register wanted to reconnect with its readership earlier this year, it did so by upping its local sports coverage. Undeniably, the kind of high school sports reporting that Narrative Science excels in – having published 300 Little League game reports in one year alone – is a priority for the paper. However the very fact that the decision was taken to bear the cost of hiring extra reporters rather than invest in cost-cutting measures suggests that the OCR, for one, is still a fan of the human touch.