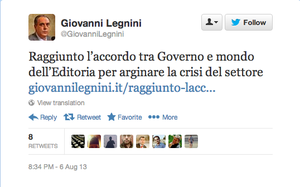 At the heart of the agreement are 11 propositions which promise financial aid and incentives for the development of the Italian media’s digital output, protection of the rights of the author online and the updating of the country’s news distribution network. More specifically, the report backs the endorsement of ‘technological innovation and corporate restructuring through financial measures such as favourable credit terms’ and the promotion, through tax incentives, of ‘the development of digital platforms and multimedia content’. The funding of new journalism startups and innovative business models is also a priority, as is the establishment of an agreement with aggregation sites, particularly Google, and news content producers. Exact details about how these schemes will be funded are unclear, but La Repubblica cites sources ‘close to the government’ as saying that the plans will receive funding of €40m per annum over three years.

The signing of the agreement marks is the first time that discussions surrounding this kind of agreement have involved and elicited the support of representatives from throughout the print and digital news production chain. Amongst the news media delegation were envoys from organisations acting on behalf of national and regional newspaper suppliers [including Associazione Nazionale Distributori Stampa and Network Diffusione Media] and those that work in the interests of journalists and news publications, like the FNSI (Federation of National Press Titles) and the National Council of the Order of Journalists.

Legnini, a key figure in the negotiations that produced Tuesday’s document, explained that the pact does not simply aim to assist newspapers in overcoming the effects of the financial crisis. Rather, it also seeks to construct a “real and fitting economic basis for the relaunch of the industry”.

While the widespread support shown by Italy’s news media players for the proposed measures attests to the desire for reform of the production chain as a whole, those elements pertaining to digital expansion and online authorship rights may be of particular interest for Italian publishers. The press in Italy has struggled to respond effectively to the shift to digital, as the country’s levels of internet penetration are some of the lowest in the European Union. The Corriere della Sera recently published an article revealing that in 2012 only 17% of Italians made purchases online, compared with an average of 45% for other European countries. Meanwhile figures calculated by Legnini suggest that over the past five years the turnover of daily newspapers in Italy has decreased by 15%, advertising revenue plummeted by 50% and there has been a 20% drop in circulation.

By joining forces to search for a solution to the economic crisis and the challenges posed by online aggregation services, Italy’s politicians and media players follow in the footsteps of their French and German colleagues. Italy’s specific media landscape is such that a deal similar to the one established between Google and the French press (in which Google agreed to establish a fund worth €60 million “to help support transformative digital publishing initiatives”) would go a long way to providing strong financial foundations for digital experimentation. For the time being, this solution remains one of the few ways for Italian publishers to monetize their digital content, at least if the predictions of vice-director of Corriere, Daniele Manca, are anything to go by. For Manca, installing paywalls at Italian paywalls is not currently possible: “the problem is that of convincing readers of the value of quality journalism in order to eventually ask them to pay for it, as 56% of readers have never paid for digital content.”

Yet while Italian readers may not be disposed towards paying for a digital news product, Tuesday’s agreement could aid newspapers in another way, thanks to its emphasis on the development of digital platforms. Manca, despite his views on paywalls, nonetheless believes that consumers are willing to pay for the ‘portability’ of content, as opposed to the content itself.

As media blog Il Giornalaio points out, it is difficult to draw too many conclusions from general criteria that will only be turned into specific legislative measures between September and the end of the year. However, the agreement and the speed with which it was reached attests to a determination to reform the Italian news sector and adapt it to the digital era, and as long as the measures don’t lead to further dependency of the news media on the state, it could be a very positive step forward.