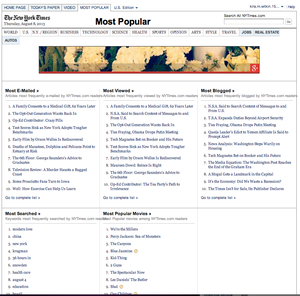 Journalists previously prided themselves on reporting “the most important” news regardless of presumed human interest, but that is changing, according to a 2012 study by Angela Lee and Seth Lewis. With the rise of story metrics, reporters are increasingly questioning their news judgement in favor of hard numbers.

While editorial analytics aren’t new — newspapers previously correlated sales to their daily front pages — they’ve now advanced to a point where each story’s performance is independently judged, mounting the pressure for high traffic to every piece of content. And now that these metrics aren’t just being reviewed by business staff, but editorial staffers as well and even publically suggested through “most-viewed” lists, tweets and story “likes,” a “culture of the click” has been created, Lee and Lewis write.

“If the visitor numbers are low, [the news desk] will publish some populist story like a story about David Beckham’s underwear to get reader figures up quickly,” said an unidentified journalist in the report.

This trend shouldn’t be surprising as content has become increasingly tied to ad sales. Whereas in the past, print ads were paid for in advance, revenue from online ads is directly related to traffic, the report points out. Newspapers may feel pressure to supplement their shoddy online ad sales with guaranteed click-candy such as celebrity coverage. And this pressure is mounting as news organizations’ financial futures seem increasingly dire: In 2012, newspapers lost $16 in print ads for every $1 in digital ad growth, The Atlantic reported.

But while several Taloussanomat staffers admitted to feeling pressure from the publisher to drive up clicks, “for credibility reasons” the news editor said that the team remains committed to pursuing some stories that won’t be high-trafficked. So while story metrics are important, they aren’t the only consideration.

Lee and Lewis’ study examined NYTimes.com, NYPost.com, and NYDailyNews.com and compared the top stories, as chosen by editors based on story placement, with “most read” articles lists on each of the websites at different times every day.

It found that audience preferences increasingly controlled story placement during the course of a day, though perhaps not in the way you might expect. Instead of highlighting the most-read articles by swapping them into premiere homepage slots, stories that were trending among audiences tended to subsequently move down the hierarchy of story placement. For instance, at 9 a.m., there was a 4 percent difference between the editors’ picks and audience’s picks, at noon 15 percent and by 6 p.m. a quarter of the stories did not overlap.

Lee and Lewis’ research found that though newsroom decisions are affected by audience preferences, readers take few cues based on editorial decisions such as story placement. This phenomenon sheds “new light [on] some baseline assumptions about the agenda-setting and gatekeeping functions of news editors,” the study says. The findings suggest that while audiences choose stories independently of editors’ prioritizations, editors are controlled by readers’ preferences.

The report reassures that “journalists still set forth an agenda and determine what passes through their gates at the point of initial publication,” but even this trend is shifting with the increasing prevalence of analytics platforms. Al Jazeera English just launched a predictive platform that gives editors advance notification of which stories might trend, so that they can place them accordingly. Similarly, Parse.ly Dash also promises to scour the web for topics “on the cusp of trending” and present them to editors before they make waves.

For more information about how analytics are affecting editorial decisions, look out for WAN-IFRA’s upcoming Shaping the Future of News Publishing report on data.